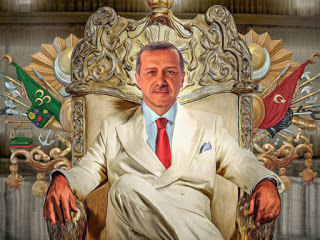 “Really, my dear chap, you seem to be reading too many romantic thrillers. This is no romance dear friend, this is reality.” –John Forsythe, The Day of the Jackal

Turkey’s lira has fallen to a record low against the dollar, and its $860 billion economy is teetering on the edge of a full-blown financial crisis. Readers of this blog will understand that the view of Turkey’s invasion of Northern Syria to kill Kurds and it’s closer ties to Iran while the rhetoric is stepped up against the US is not endearing.
Turkey’s President (now president-for-life and sultan), Recep Tayyip Erdogan’s move to what is essentially a theocracy with himself as Allah’s mouthpiece could only be deemed successful by the western-influenced Turkish population if he was able to deliver strong economic growth.

The Lira slumped to a fresh all-time low of 6.4915 against the dollar Friday, extending its year-to-date plunge past 30%, before paring the decline to 5.99 after a trade delegation of senior government officials left Washington yesterday with no verifiable progress on the White House’s decision to review Turkey’s “duty free” access to the U.S. market.

Jib-Jab
Yesterday, President Recep Tayyip Erdogan, urged Turks to take the gold from “under their pillows” and convert it into lira, vowing that “we are only responsible to our own people and our own righteousness.”
President Donald Trump responded via Twitter shortly after, announcing he would double the level of tariffs applied to Turkish steel and aluminium imports, a move that extended the lira’s decline past 6.53 against the dollar and pushed U.S. equity futures deeper into the red.

Turkey is the world’s ninth-largest steel exporter, according to IHS Global data, with around 12% of its total going to the United States, its single biggest buyer. Maybe the Sultan should have read the tea leaves before blasting the US?
Turkey’s biggest, and most immediate, problem is linked to the fact that it can’t support the Lira with conventional means: Erdogan won’t allow the central bank to raise its benchmark lending rate (which sit at an eye-watering 17.75%) and doesn’t have the requisite amount of U.S. dollars to defend its decline on foreign exchange markets.
In fact, it holds virtually no U.S. dollars in its $80.7 billion worth of foreign currency reserves despite shifting more than $1.7 billion worth of goods to the United State each year. And while China recycles much of its trade cash into U.S. government bonds (it owns around 6.8% of the $18 trillion in outstanding US debt), Turkey prefers to purchase gold, which as fallen more than 7.4% in dollar terms. He may end up working up a bailout from the International Monetary Fund, but the IMF would put restrictions on Sultan Erdogan and that would tend to discount the whole God’s mouthpiece vibe that he’s crafted for himself.
What About Europe?
European lenders might be the first, and most significant, casualties from the Turkish meltdown, given their expose to the domestic market on their already-fragile balance sheets. Three major regional lenders — France’s BNP Paribas (BNPQY) , Spain’s (BBVA) and Italy’s UniCredit (UNCRY) — slumped to the bottom of the Stoxx 600 Friday amid reports that the European Central Bank has expressed concerns for their potential vulnerability to Ankara and their collective €135 billion exposure.

The euro fell to a 14-month low of 1.1458 against the dollar yesterday, while benchmarks in Germany and France fell more than 1%.

Welcome to Germany?
A spiralling crisis could entice the more than 3 million Syrian refugees currently residing in Turkey, as well as Turks themselves, into migrating further into GERMANY and the EU, a move that would only harden the resolve of populist political movements who don’t want to Islamify. We’ll simply wait, eat popcorn, and see how it works for them.
What About Turkey’s Ally, Iran?
What are the mullahs to make of the Turkish bind? They launched ICBM’s yesterday to show that they can’t be pushed around.
Hmmm.
Only God can decide whether terrorists in Iran and their allied states are right or wrong. The US has taken the position of simply acting as God’s travel agent.