Every time that the mainstream media latches onto an idea, I attribute it to the Obama Administration because they are completely locked at the hip. So it is with great skepticism that I view the New York Times’ story, justifying in its own subtle way, “Pentagon Says 75,000 Troops Might Be Needed to Seize Syria Chemical Arms”. Now the Obama Administration is ‘channeling George W. Bush’ and trying to ramp up an invasion of Syria — not to occupy — merely to take away their chemical weapons. I’m sure that a UN Resolution will follow soon.

The White House on Thursday declined to comment on the Defense Department’s assessment. (NY Times opcit)

The discovery that Hezbollah has set up camps close to some of the depots, however, has renewed concern that as the chaos in Syria deepens, the country’s huge chemical weapons stockpiles could fall into the wrong hands. Hezbollah fighters have been training at “a limited number of these sites,” said one senior American official who has been briefed on the intelligence reports and spoke on the condition of anonymity. “But the fear these weapons could fall into the wrong hands is our greatest concern.” (NY Times continues)

Since Hezbollah is a code word for IRAN, and Syria is Iran’s only ally, are we saying that we want to keep Iranian (proxy) chemical weapons out of the hands of (another) Iranian proxy? While it might make sense to NBC’s Brian Williams or some other Obama cat’s paw, it doesn’t wash with me.

So far, there is no evidence that Hezbollah, which is based in Lebanon but has become increasingly active in protecting the government of President Bashar al-Assad, is making any effort to gain control over the chemical weapons. (NY Times continues)

No but they could, so we should send in 75,000 troops to make sure that they can’t or that President Assad can’t use his weapons either. 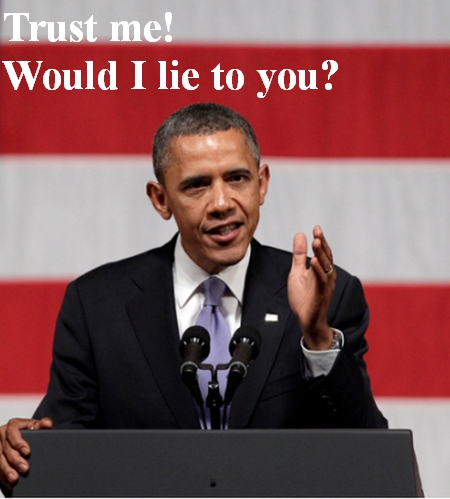 The New York Times doesn’t want to paint Pres. Barack Hussein Obama as a warmonger. Rather, he’s a wise and balanced leader who’d NEVER LIE to the American people.

Mr. Obama has been clear for more than a year that he would resist direct American intervention, but in August he said one circumstance would cause him to revisit that position. “A red line for us is we start seeing a whole bunch of chemical weapons moving around or being utilized,” he said at a news conference. “That would change my calculus.”

There are subtle hints that Syria may be upgrading their Scud D Russian supplied missiles with North Korean technology. Nothing concrete, just fears and concerns.
So the mainstream media is putting the word out and playing the Obama Pentagon’s game, which brings me back to trusting either them or our pseudo Muslim, pseudo communist commander-in-chief. Why should I trust the regime that is bent on destroying the American economy to take us to war?