Who wants a War with China? 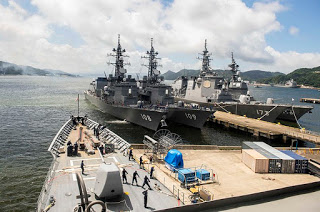 Facebook
Twitter
Pinterest
WhatsApp
Fox News reported that China flew two J-11 fighters to Woody Island in the Parcel Island Chain (claimed by China, Vietnam and the Philippines). The previous fighter deployment to the island occurred around 24 February. The timing of the Chinese appears to be deliberately intended to coincide with a Japanese port call, which was well publicized beforehand.

Woody Island is the main Chinese forward base in the South China Sea. The South China Sea has become militarized and Woody Island (turned from a reef to an Island by artificial means by Chinese engineers) is the dominant permanent military feature in the Sea. Asian leaders know to expect deployments by Chinese air and naval assets. They will become routine and they will be followed by regular air and sea patrols on the periphery of China’s claims. China will aggressively defend the territory that they have seized.
Two Japanese Maritime Self-Defense Force (MSDF) guided-missile destroyers made a port call at Cam Ranh Bay naval base on 12 April. The call by the guided-missile destroyers and Setogiri was the first to be made by any MSDF ship, according to the Japanese embassy in Hanoi.
This is another historic milestone in post-war Asia because it also is the first visit to Vietnam by any Japanese warship since World War II. The antagonists are familiar to all, but the roles are reversed. This time Japan is part of the gathering alliance that opposes Chinese hegemony.
It is difficult for small nations to go it alone against China, which is building its navy at an unprecedented rate and is constructing and fitting out aircraft carriers to defend the vast maritime area (about as large as mainland China) that they have claimed, and that they intend to defend against outsiders…while they fish the place dry and drill for oil. The Chinese have never demonstrated much interest in ecology, their penchant for unrestrained pollution or in “saving the planet”.
The $338 billion annual trade imbalance between the US and China has helped fuel their military expansion, cost the US many tens of thousands of jobs and we are living to regret it – but you’ll never hear that in the mainstream media or from Pres. Obama’s blue lips.