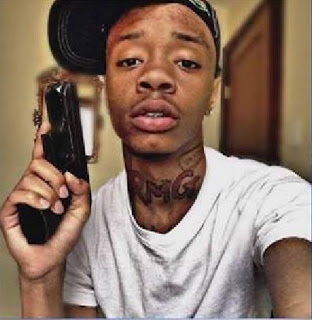 Facebook
Twitter
Pinterest
WhatsApp
The photo (right) is of 16-year-old Pierre Loury. He was shot and killed by a Chicago Police Officer Monday night. According to reports, Mr. Loury fled from a car wanted in an investigation of an earlier shooting. He alledgedly pointed a gun at the officer as he tried to elude them.
Tuesday night hundreds of black lives matters protestors blocked city streets demanding justice for poor sweet Pierre. Those same protestors have been mostly silent as Chicago has seen 914 people shot and 166 Homicides to date in 2016.
Of those, only 4 were shot by Law Enforcement.
The reality of the situation is that Pierre would likely have been killed before the year was out if he hadn’t pointed his handgun at a police officer this week – and nobody would have protested, or been present when his carcass took the six foot drop or was roasted to dust in a local oven.
I  shed no tears for Pierre Loury, the gang to whom he owes allegiance or for his family who neglected him. He’s a statistic who was born of Democratic Party Machine Politics which has worked diligently to keep black people poor and dependent on welfare. It’s worked to divert funding from schools so that they are wrecked institutions and the union members who teach there are as apathetic as the students.