Who is Nicole Lurie? 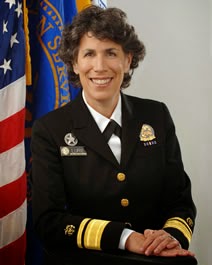 (IBD) Earlier this week, Sen. John McCain called for an Ebola czar, not knowing one already effectively exists. Why should he, since Nicole Lurie, M.D., M.S.P.H., has been completely M.I.A.

You have to wonder sometimes if anyone in a leadership position in the Obama administration bothers to show up to work these days.

Case in point is Dr. Nicole Lurie, who arguably should be front and center in planning for and responding to the Ebola outbreak.

After all, it’s right there in her job title. She’s the Assistant Secretary for Preparedness and Response, a position created in the wake of Hurricane Katrina that reports directly to the Secretary of Health and Human Services. Her mission, according to the HHS website, is “to lead the nation in preventing, responding to and recovering from the adverse health effects of public health emergencies.”

If the uniform that she’s wearing looks a little odd to you swabbies out there, it’s because she’s with the National Public Health Service and they wear US Navy uniforms (like the surgeon general).
If you haven’t seen her in the news, it’s because she’s laying low. I have no idea why that is. I have no idea what she’s doing to earn her princely salary and what her plans are for ALL OF US. She works for the people, right? (yeah, right)

On Sept. 11, Lurie told the Washington Post that her office was diligently working with other federal agencies “to ensure that U.S. health care providers, hospitals, health clinics, emergency medical services … have the information they need to be prepared to identify and treat Ebola infections, in case anyone in the United States becomes sick after traveling from affected countries or from contact with infected individuals.”

What is she doing to carry out this mission? Apparently nobody knows – not in the Obama Administration anyway. There are even mainstream media people looking for her — that’s how weird it’s getting. Imagine, the mainstream media covering something like the ebola situation.

After $9 billion in federal money distributed to U.S. public health departments since 2002 for emergency preparedness, after widespread publicity about West Africa’s outbreak since last March, after reassurances that the world’s best and most modern health care system would keep Ebola out of the U.S., Duncan managed to carry the deadly virus deep into the heart of Texas by defying the honor system designed to stop it: He simply denied his contact with an Ebola patient in Liberia.