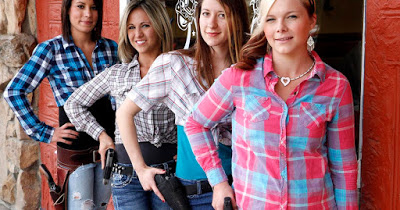 Facebook
Twitter
Pinterest
WhatsApp
(h/t Jules) LINK and LINK
There are a lot of places like Shooter’s Grill (located in Rifle, Colorado), in the West. Of course, everyone is armed, it’s a right, whereas something like a driving license is a privilege. It’s the sort of place where pajama boys, Men for Hillary, and low testosterone males would fear to tread.  But it’s safer than a bodega (corner store in a liberal elite city)  or a bar in New York City or Hollywood.
Why would anyone feel threatened?

The Old West is long gone, but the New West is like kryptonite to liberals. Men and women armed to the teeth, jealously defending their rights, is something that the bi-coastals are working diligently to eliminate once and for all.
An armed society is a polite society.
Come for the girls and guns, stay for the food.