Facebook
Twitter
Pinterest
WhatsApp
Ebola Czar
It has been a very interesting week. We learned that we have had an Ebola Czar since this insanity began, but that nobody’s heard a peep out of Nicole Lurie, Assistant Secretary for Preparedness and Response in the Department of Health and Human Services. That may have to do with a nasty rumor that’s been circulating to the effect that she diverted funds from their intended purpose to an Obama donor. Nobody seems to be upset about this, but it’s a dog-bites-man story. That’s how the entire Obama Administration has operated (Chicago style) since 2009.

We have also learned that a simple dose of over-the-counter tylenol will mask ebola symptoms for those who wish to enter the US from the hot zone in West Africa. This means that the measures being taken by the US Government at ports of entry can be thwarted by a fifty-cent purchase of cold medication.

President Obama stopped fund raising and is staying home in the White House. Some people say that it’s to lead. I suggest to you that he doesn’t want to run around shaking hands with the general public for fear that some Muslim will self-infect and give the Leader of the Free world a dose. It’s clearly  possible and the infected human bomb could simply fly into the US with a bottle of tylenol to defeat the Transportation Safety Administration and Department of Health and Human Services.

Mobilized the Reserves re: ebola

Yes, Obama stays home, but he must be getting some advice about how badly things could get because he’s mobilized the US Military’s Ready Reserves to go to Africa and fight ebola. But we still won’t ban people from the hot zone in the US. Riddle me that one. 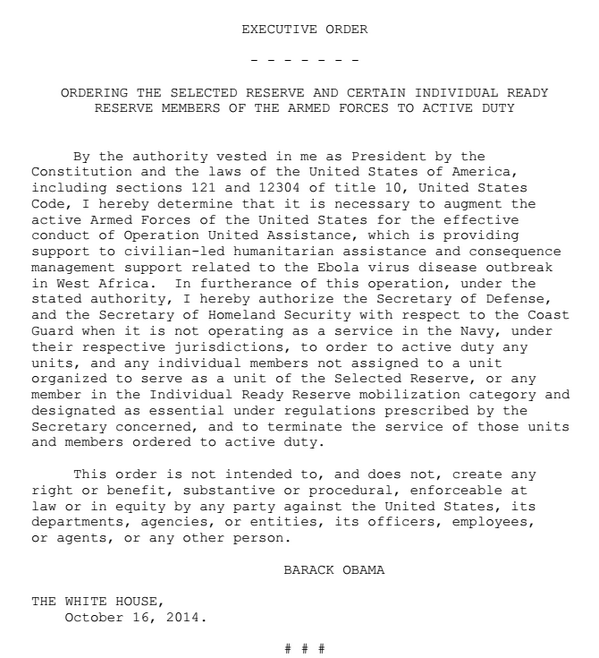 The Wheels are off the Trolly

WPTZ 5: Ebola WHO Cases – Data shows that the number of Ebola cases in West Africa is doubling every four weeks, said Dr. Isabelle Nuttall, director of the World Health Organization’s director of global capacity, alert and response. Nuttall was addressing reporters Thursday in Geneva, Switzerland. Earlier this week, the WHO said there could be 5,000 to 10,000 new cases of Ebola per week by December.

ITV: MSF:’We have reached our ceiling in Ebola response – October 16, 2014 1:45PM The leading organisation fighting the Ebola outbreak in West Africa has said it has reached the limit of its capacity to help, and called on governments and other groups to step up their efforts.

The Australians are not going to play in Africa. I can’t say as I blame them. Australia Can’t Deploy Health Workers to Ebola Hotspots: PM

Obama annoyed by Ebola response from France, Italy via TheHil