Wards of the State 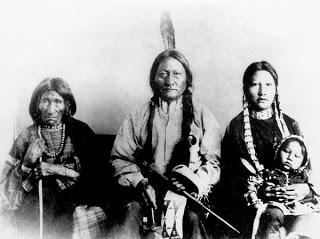 Facebook
Twitter
Pinterest
WhatsApp
The history of the welfare state in America is best explained not by metaphor but by actual examples. Yes, I could point to President Lyndon Johnson’s failed ‘Great Society’ – a bid to buy black votes with taxpayer’s dollars and to keep those same voters on welfare generation after generation. But I won’t.
The American Indians provide a better example. Even though hunter/gatherers are in no way capitalists, they could be said to be ‘early libertarians’ of a sort.
To the left, we see Sitting Bull’s mother, the great man, himself, his daughter and grandson – in captivity. The rifle he holds is a prop. By this stage of his life, Sitting Bull and his family were on welfare, enjoying the largess of a federal government who put a people on food stamps forever. Allowing the Red Man to hunt game and roam at will would simply not do. Better that they stay on reservations and receive government hand-outs.
I don’t know how many of you readers have spent time on Indian Reservations, but they’re generally not examples of a prosperous people. They are a proud people made wards of the State.
Indian Gaming changed a lot of that and through the gift of capitalism, many of the reservations are blossoming as a rose exposed to nourishment and sunlight. When you give people opportunity in an  unregulated environment, it’s amazing to see what can be done.
This is your life in the welfare state:
This is your life when you have the freedom to be a capitalist: