Greece – In the News 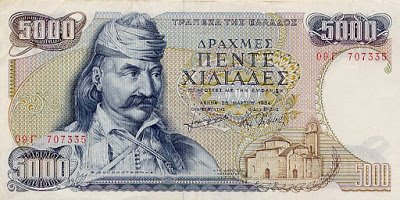 As some of this blog’s readers know, I have spent time in Greece, working, and maintain an interest in Greek Politics. Some of the key players in Greece are friends of mine. It’s a small country and don’t take it that I’m important. I just moved in some of those circles because of work. For those of you (if any) actually care about what is going on in Greece and the full back story, I recommend this series of articles in the Globalist (Part I) Part II: The Political Culture of a Protectorate; Part III: Missed Opportunities: The Political Culture of Greece Since 1974

In 1943, the head of the British Military Mission to the Greek partisans, Brigadier C. E. Myers, groaned in exasperation about Greek politics: “The Greeks are Asiatic. One cannot judge them by European standards.”
Despite the fact that this statement is factually wrong, it points to a difference between the political cultures of Greece and those of Western Europe.

After the Greek financial crisis broke out in late spring 2010, European leaders of today demonstrated that they did not have the slightest idea how the Greek political system functions.

This is what’s going on there now:
Context and Precedence 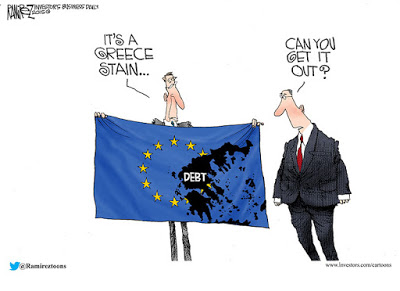 Last Friday Greece asked its creditors, the European Union (EU) members, the European Central Bank (ECB) and the International Monetary Fund (IMF) for an extension of the 30 June deadline for defaulting on its debt payment. The big three creditors rejected the request.

Greek Prime Minister Tsipras then proposed that the Greek electorate vote on the settlement terms offered by the EU, ECB and IMF. The European creditors reacted negatively to this proposal because it would shift to the electorate the government’s responsibility for reaching an agreement with the creditors.

News of these interactions apparently was responsible for starting a run on ATMs on Friday and Saturday. This was the first serious sign of panic.

Last Saturday the European creditors rejected a second request to extend the current bailout to cover the period leading to the referendum.
Last Sunday, the Greek parliament authorized a bailout referendum on 5 July. Some of the key issues are concern about raising the VAT and taxes on the rich, increasing the age for retirement and reducing pensions and other entitlements. These are highly charged issues because Tsipras’ Syriza Party was elected in January on the strength of its promise to end Greece’s austerity programs.
Prime Minister Tsipras filed a renewed request for an extension of a few days for bailout. The Europeans creditors again rejected his request.

Late on Sunday, banking officials said banks would be closed all week. ATM’s are open and Greek Citizens can withdraw 60 Euros per day.

The Hellenic Republic of Greece is running out of other people’s money to spend.

ATHENS, Greece – The bailout expires Today, the same day that Greece has to make a payment of 1.5-billion euros to the International Monetary Fund (IMF). It risks defaulting on that payment if agreement is not reached, which will impact global markets significantly.

Rather than take responsibility, the Greek government decided to seek a fresh mandate from the electorate, rather than agree to European terms. The European creditors have had enough of pledges of austerity and reform that Greece has not kept. The refusal to extend liquidity to the banks means the banks cannot cover their liabilities to their lenders.
A run on the banks seems almost unavoidable, barring compromise, but the Tsipras government has linked its fate to the 5 July referendum.
The first flash point is this week. The main threat is that people will attack the banks to get money. Crimes against persons also are likely to increase. Confrontations with police and security personnel can escalate without warning.
The second flash point will be after the referendum results become known. They might incite some parts of the population to agitate no matter the outcome. If Greeks vote to stay in the EU, they must accept austerity and cuts that they voted against when they elected Tsipras and his Socialist party. The left will feel betrayed and may be expected to act out.
If voters reject the new austerity program, the European creditors appear ready to let the Greek economy drift until the Greeks come to their senses. The government will have succeeded in blaming the creditors and the voters, but the economy, or additional parts of it, could devolve to barter for a time.

Based on discussions with friends on site, a lot of the older people who remember Greece before the Euro, are willing to accept a return to the Drachma (national currency). There have been many times in Greek history when a literal chest of million drachma notes were needed to buy groceries. The present crisis, isn’t new in Greek history.

(Globalist) If there is a broader lesson to be learned, it is this: Formally, Greece is a democratic state with separation of powers, elections, free press, etc. That makes it look like many other European countries.

However, the country’s underlying political culture is totally different from that of Western and Central Europe. The state is, in effect, an object of exploitation for all those who can tap into the money tools it can provide access to.

In elections, a Greek voter does not vote for a party, but against that party which did not do him the expected favor during the previous term.
The two longtime ruling parties, the left PASOK and the conservative Nea Dimokratia, are clientelistic pyramids. Syriza is now demonstrating that, rather than representing a rupture from the past, it very much follows in its predecessors’ footsteps.

Socialism doesn’t work, and in Greece, we are seeing a vast internal, national system of patronage and greed that operated on borrowed money come to an end as the patience of European bankers wears out.