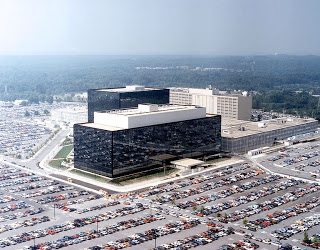 ECHELON – (generic name for SIGINT) can be used to control the download and dissemination of commercial satellite trunk communications (worldwide) principally through the VORTEX satellite system, though a number of ground stations are involved in the network. This would include the not so secret anymore ‘Room 641A’ in San Francisco.
I didn’t post any of this unclassified data for any reason besides taking the opportunity to express my love for BIG BROTHER and to suggest that I know that everything I (ever) put on line will be saved forever and that it may be analyzed during my lifetime or thereafter to better the understanding of what a genuinely wonderful person I am. Since posting these names on my blog will mean that the government will visit to see what I wrote, I want it noted that I only said positive things about the vast ability of others to keep an eye on me.
As a US Military Officer, I was given the following advice, “Enlisted men are back-stabbing bastards and are just setting themselves up to scuttle your career.” -and- “Enlisted men are stupid, but they are sly, cunning and bear considerable watching.” It would seem that the USGOV considers its citizens and potentially all non-citizens as being in the same category as US Enlisted service personnel and that Congress declaring me to be a gentleman (legally) has somehow been ignored. “Because gentlemen don’t read other gentlemen’s mail.” – US Secretary of State Henry L. Stimson (1929)
(h/t Opus #6)