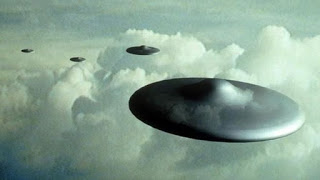 Facebook
Twitter
Pinterest
WhatsApp
Following articles at Northrop Grumman NOW is an interesting pastime. I refer you to this article. The theory is that thousands of black hoes may orbit Sagittarius 1, the super massive black hole at the center of the Milky Way Galaxy, where we live. Understanding more about them and their existence would help us focus on gravity wave research. Understanding specifically how gravity works (string theory or maybe something else) is key to developing a unified field theory of why and how things work that would apply to the quantum world as well would advance science significantly. And so I’m going to go on a mini science rant.

The LIGO gravity wave observatory detected gravity waves from the collision of two neutron stars. This was quickly followed by the detection of a gamma ray burst by the Fermi space telescope, and then a host of other observations from other telescopes. This event quickly became the most heavily observed single event in astronomy. There are several good general reviews of what happened that are very accessible to the average reader (NY Times, NPR, Veritasium, and one more in depth from Phys.org.
Gold is very important in astronomy because it is very heavy and hard to make. Usually astronomers ignore the different types of elements, we are usually only concerned about hydrogen and helium. There is a joke in astronomy that the astronomer’s periodic table of elements is the simplest one since they only have three elements, hydrogen, helium, and “metals”. They refer to everything that is not hydrogen and helium and metals (that includes decidedly non-metallic elements like nitrogen, oxygen, carbon, and neon). It keeps things simple.
When it comes to metals, astronomers are concerned with what they call metallicity, that is the relative amount of metals compared to hydrogen and helium. Because hydrogen and helium make up a combined 98% of the mass of the universe, on a cosmological scale everything else is just a rounding error. But on smaller scales (small, as in the size of a cluster of galaxies) the amount of metals becomes important. Except for a tiny amount of lithium, everything that is not hydrogen and helium was produced inside stars, one way or another.
When a star goes through its life cycle it will return a significant amount of mass back into the interstellar medium in the form of stellar winds. For a large star with an initial mass of 10-20 times the mass of the sun, the star may return 80-90% of its mass to the interstellar medium in the form of stellar winds, or a nova or even a supernova. 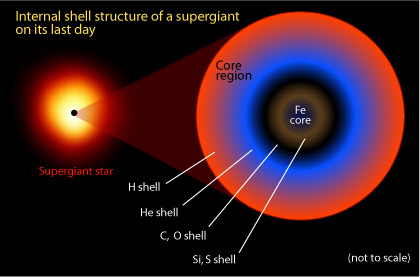 While a star may start out as almost entirely hydrogen and helium when it forms, the gas that returns to the interstellar medium will be slightly enriched with metals, that is, the metallicity will go up. This enriched gas that has been returned to the interstellar medium will go on to form a second generation of stars, which will still be almost entirely hydrogen and helium, but now with a tiny fraction more of metals.

The process will repeat, and each time it does the gas will become more enriched with metals. In order to have enough metals that rocky planets such as the Earth can form the gas must go through at least 20 star formation and enrichment cycles. To date, the highest metallicity ever observed in a star is about three times the metallicity of the sun.

Because of something called the nucleon binding energy only elements up to iron can be produced in the conventional way inside of stars. Anything heavier than iron needs to be produced in another way because it is en endothermic reaction and requires huge amounts of energy. Some heavy elements are produced in supernovas but there is a subtle problem with that. While there certainly is enough energy in a supernova explosion to produce the heavier elements, most of the mass that is blown off in a supernova is hydrogen. It would take an immense amount of energy and a string of complex, and highly improbably reactions to convert that much hydrogen into elements as heavy as gold, lead and uranium.
In nuclear physics there are two processes which can produce heavier elements, named the r-process and the s-process (unimaginatively the r and s stand for rapid and slow respectively). The s-process takes less energy and a much lower neutron flux, and can happen over long time scales. In the s-process heavy elements are built up slowly one neutron at a time, and allows for neutrons to decay into protons.
The r-process requires huge amounts of energy, and a truly astronomical neutron flux. A parent element is bombarded with a huge number of neutrons to make an extremely unstable isotope. The only thing keeping it from decaying into smaller elements is the rate at which neutrons are bombarding the nucleus. While a supernova has enough energy for the r-process, there is a distinct lack of neutrons to achieve the neutron flux necessary for the r-process to take place. It does happen, just not at a high enough rate to explain the amount of gold, lead, uranium, and other really heavy elements we observe in the universe. So while normal stellar processes can explain the carbon, oxygen, and nitrogen we see, and novas and supernovas can explain the amount of aluminum, iron, nickle, and zinc we see, neither of those can explain the amount of gold, silver, lead, and uranium we see.
This is where merging neutron stars come in. In the collision there certainly is enough energy for the nucleosynthesis to take place, and because there are two massive sources of neutrons being ripped apart, the problem of meeting the minimum neutron flux is solved. But up until now we had no hard confirmation of neutron star mergers, much less finding evidence of r-process production of heavy elements. It has been suspected for years, but only with the LIGO detection and the followup observations of the nova remnant has this been confirmed. With the detection of r-process reactions in the remnant of the merger we can now conclude that almost all of the gold, uranium and other very heavy elements come from neutron star mergers.
Below is an updated periodic table of elements that shows where each element comes from. Some come from more than one source, but you can see just how many elements were detected in the neutron star merger. The purple shows elements from neutron star mergers. It is much more than gold. This is why the detected merger was so important. It showed us where many of the heavy elements came from like gold, silver, lead, platinum, iodine, bismuth, tin, uranium, and many more.

You can see it graphically represented at  the link to wikipedia here.

What really happens when black holes (not neutron stars) collide? Do they just make larger black holes or does something really exotic happen from a science perspective? The answer is that we don’t know, but in the presence of thousands of black holes at the galactic center, we’ll see some of them crash together. It gives us something else to look for.
The flying saucer graphic at the top of this blog post is just click bait…