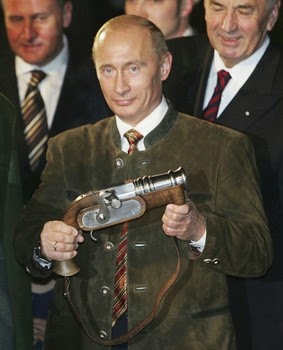 (Examiner) Because of, rather than in spite of one of the world’s highest murder rates, Russian gun laws have now been relaxed, International Business Times reported Wednesday. Previously permitted for sporting purposes such as target practice and hunting, Russians, the story claims, will now be lawfully allowed to carry guns for self defense.
While Russian violent crime has fallen in recent years, its murder rate is still fifth highest in the world, and is much higher than that in the United States, the report documents. The move to liberalize gun laws there contrasts with well-financed efforts to increase restrictions in this country, despite documentation from the Bureau of Justice Statistics that prompted Forbes to acknowledge, “As gun sales soar, gun crimes plummet.”
CALIFORNICATION 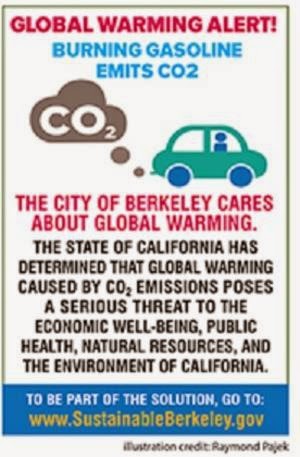 The City of Berkeley wants you to know that they care about the serious threat to public health, economic well-being and global warming, so these pathetic signs are now on all of the gas pumps in town.
It simply warms my heart to see progressives being stupid — which is not difficult to find in Berkeley, or Detroit, or Austin, or San Francisco, or the White House.
IRAN

Iranian Nuclear weapons production and nuclear enrichment talks  are proceeding with US Secretary of State John Kerry arriving — just as the Iranian delegation is leaving. SECSTATE Kerry is not the sharpest knife in the drawer, so he’s the perfect one to negotiate on behalf of the free world since Joe Biden is having his face stretched again and won’t be able to attend.
Eventually, Biden will end up looking like Nancy Pelosi (The Pelosi Twins), but he has a lot more surgery ahead of him to get to that point.