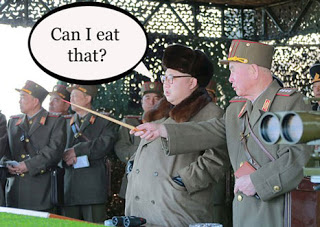 Facebook
Twitter
Pinterest
WhatsApp
Nork Missiles
The question was raised by S. E., who reads but rarely comments on this blog: “Why hasn’t the US shot down Nork missiles?”

General Mattis responds here (LINK). If you don’t want to click the link, in a nut shell, the tests have fallen short of threatening the US to date. The North Koreans have carefully avoided doing that so far. Japan has had two overflights and may decide to shoot down one of the North Korean missiles in the future. It’s building the capacity to do so now, working closely with USGOV and contractors to make that happen. The North Koreans would likely take a missile shoot-down as an act of war and would flatten Seoul and kill twenty million civilians. OR NOT, but the US is not rolling the dice. If you give the only fat man in North Korea enough rope, he’ll hang himself. Maybe the Chinese will kill him off by peaceful means? It would be a gift to the people of Korea of great price. Avert a war, feed 23 million starving Norks, and make the world a better place for all but the North Korean elites, who would likely find themselves hanging from a jibbet once the people realized how badly they have been used and how wickedly they were deceived.

A Note to I-40 Travelers

The Northern Pines restaurant puts out one of the best breakfasts in Flagstaff, AZ – north of the White Wolf Mine. It’s attached to a Day’s Inn, which, under normal circumstances would mean that I’d never eat there (I’m a bit of a hotel snob). HOWEVER, I’ve eaten there many times and it’s simply a great place. Everything on the menu is recommended. Yesterday I had the Meatloaf, smothered in green chili sauce, eggs over medium, etc. They even have a chili verde enchilada breakfast that’s superb. Not everything has chili on it. The cinnamon roll french toast will make your arteries crackle (in a happy way).

The White Wolf Mine is close to being established as the White Wolf Mineral Exploration and Transportation Company. Don’t hold your breath for a website. It will start as a sole proprietorship and will be incorporated as I incur the potential of liability. If any of you out there are ambitious and want to help a fledgling business, I’m open to print-quality logo ideas.