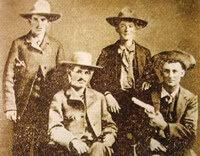 Facebook
Twitter
Pinterest
WhatsApp
Sam Bass
This is one of the few known photographs of Sam Bass (standing at left), taken in Dallas during a cattle drive to Kansas in the summer of 1876.

Standing next to him is John E. Gardner, seated are Joel Collins (right) and his brother Joe, who would become Bass’ partners in the richest train robbery in US history. The Bass Gang robbed a Union Pacific train in Big Springs, Nebraska of $60,000 in newly minted twenty dollar gold pieces.

One of the best collections of Sam Bass memorabilia is in the City of Roundrock, Texas (LINK)

On 14 May, Iranian Supreme Leader Ayatollah Khamenei said, “There won’t be any war. The Iranian nation has chosen the path of resistance. We don’t seek a war, and they don’t either. They know it’s not in their interests.”
Khamenei knows that the US forces around Iran are capable of starting a conflict and of inflicting enormous damage. The leadership also judges that the US forces are not prepared to wage a general war against Iran. However there are scenarios short of a full fledged invasion that would work for the US. Bombing oil pipelines and infrastructure, capturing Kharg Island and the Basra area to take their oil and deny the regime revenue would throw them back (further) toward the Stone Age.
During the Syrian civil war, Israeli forces have attacked Iranian facilities in Syria repeatedly and killed Iranians and their proxies, as well as Syrians. Iran has threatened retaliation repeatedly but has not acted on those threats in a significant or sensational manner. With resources committed to support Syria and Lebanese Hizballah, Iran was in no condition to start another conflict, even before additional US sanctions were applied.
Khamenei’s statement reveals that the Iranian leadership understands the danger of escalation that would result from an attack on US interests, even by an Iranian proxy. They have taken no civil defense or other civilian protective measures that would indicate they expect an armed confrontation with the US.
So, it appears that they will ratchet the pressure up on the (more) roguish elements within their sphere of influence so as not to risk the confrontation that National Security Advisor, John Bolton would really like. While I have nothing personal against Bolton, his refrain has always been war. And sometimes you need to do that. However, best try war by other means first and exhaust those options before dropping bombs and sending in the infantry.
The Saga of the M/V Wise Honest
North Korea demanded the release of their ship M/V Wise Honest, which the US impounded in American Samoa. The US Justice Department filed a complaint for civil forfeiture of the ship on 9 May for its participation in sanctions violations. The ship is the named defendant, as is the custom in admiralty law.

North Korea called the seizure a “flagrant act of robbery” that violated the spirit of the agreement reached last year between Chairman Kim Jong Un and the US President.

“The United States’ action is an extension of its calculation aimed at subjugating us through the so-called maximum pressure and flatly denies the spirit of the June 12 Joint North Korea-U.S. Declaration where both sides agreed to build new relations,” the North Korean Foreign Ministry said in a statement.

“The United States must mull over what repercussions its gangster-like act will entail, and must return our vessel without delay,” the ministry said.

The US Justice Department wrote in its complaint that this is the first time the United States has seized a North Korean cargo ship for violating international sanctions. Various US agencies have been watching this ship for years.
The complaint states that this ship, along with some others, have been part of a long-standing North Korean scheme to evade sanctions by shipping coal and importing machinery, using unwitting US banks and payments in US dollars.
A commercial imaging satellite imaged the ship in March 2018, while it was loading coal at the port of Nampo. That imagery is attached to the complaint. M/V Wise Honest is neither wise nor honest but is one of the largest bulk cargo carriers North Korean owns.
The ship was first detained by Indonesian authorities in April 2018 for not operating an automatic identification system required by an international maritime treaty. Its papers claimed it loaded the coal at Nakhodka, Russia, at the time the imagery showed the ship at Nampo loading coal.
Unless the ship owners or the cargo owners – North Korean trading companies– come forward to contest the complaint, the ship and cargo may be sold.
Filing a complaint against a ship is settled admiralty law. A main purpose of that legal action is to bring the owners within the full jurisdiction of the court, in this case the North Korean company, which is an agent of the North Korean government.
Once in the jurisdiction of a US court, even in American Samoa, the North Koreans may be served with a host of other unrelated legal actions.
All merchant ships must be registered to establish which law governs their movements and behavior. A ship can only be registered to one country at a time.
The North Koreans created a very complex and lucrative shipping scheme, including deception of US banks, that worked for years. They routinely register their ships under foreign flags to evade sanctions and for deception. The M/V Wise Honest was registered as a North Korean flag ship.