Russia in Syria, and Barack/Clinton 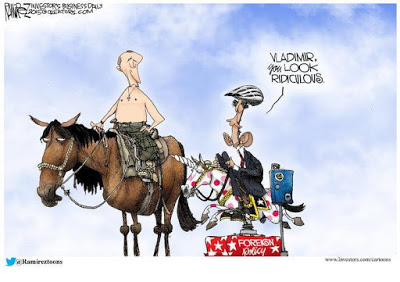 Russian relations with the US over Syria continue to worsen. Barack is caught holding his part in his hand and the Russians are treating him like the goof that he is, rather than the super genius that he thinks that he is.

Russian Defense Ministry spokesman Major General Igor Konashenkov taunted on 6 October, “Let me remind the so-called US strategists that the air cover for the Russian military bases in Hmeimim and Tartus is provided by S-400 and S-300 surface-to-air missile systems, whose range may come as a surprise to any unidentified flying objects.”

Russian Foreign Ministry spokeswoman Maria Zakharova accused the West of protecting the al-Nusra Front. She said at a briefing, “So far we see in the actions of Western countries, first of all, not a concern about the humanitarian situation in Syria but a desire to protect Al-Nusra fighters and the forces and groups of fighters affiliated to them. To be even franker, not just to protect them but directly get them away from harm’s way.”

The statement by General Konashenkov apparently is a pre-emptive response to press reports that the US is considering approving air attacks against Syrian government forces. His response is a dare. The message is that the Russians will shoot first at long distance. 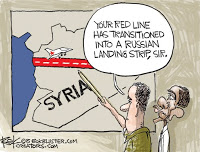 Ms. Zakharova’s statement repeats the main complaint of Foreign Minister Lavrov: that the US has not been negotiating seriously because it has not tried to separate opposition fighters from terrorists and has gone beyond protecting its proxies. The Russians do not seem to mind the diplomatic stalemate because they are the dominant power in Syria at this time. They never expected the US to be able to separate the fighters and are comfortable treating all anti-government groups as terrorists. Assad is grateful.
Without the Sixth Fleet, which Obama dissolved, the US doesn’t have the punch in the region that it once did. The Russians understand the strategic situation. 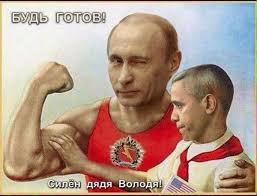 Thus the Obama Doctrine is laid bare. Barack’s plan was to move away from a world where stability and “the success of liberty” (JFK, inaugural address) were anchored by American power. Barack’s  vision of disengagement from the grubby imperatives of realpolitik yielded Crimea, the South China Sea, the rise of the Islamic State, the return of Iran, this time with a nuclear weapons capacity.
After endless concessions to Russian demands meant to protect and preserve the genocidal regime of Bashar Assad, last month we finally capitulated to a deal in which we essentially joined Russia in that objective. But such is Vladimir Putin’s contempt for our President that he wouldn’t stop there. Obama, left with no options — and astonishingly, having prepared none — looks on, dick in hand – or maybe it’s out for Harambe? 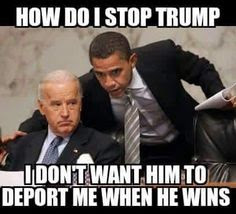 Trump has not capitalized on this. He seems preoccupied with a fat Venezuelan and other small ball details that he is obsessively defending, when nobody cares.
He’s not a very good politician. (but yes, he’s much better than Jeb!) I think that he’d be good on trade and the economy while leaving foreign policy and other programs to VP Pence.