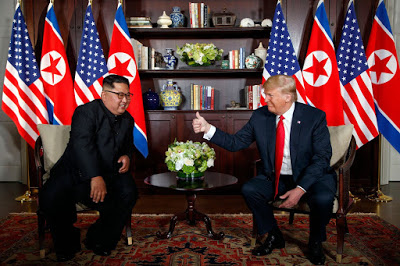 Facebook
Twitter
Pinterest
WhatsApp
Some of this blog’s readers have e-mailed me and asked why my obsession with Norkland. It’s not an obsession, but you’ll recall that I predicted nuclear war. Now peace is breaking out, painting me as completely wrong (in a good way).
Let’s hit a few points, and it’s generally very good news:
Red Cross
Delegates from South Korea and the Democratic People’s Republic of Korea (DPRK) are engaged in Red-Cross talks at the Mount Kumgang resort on 22 June. Talks began at 22:00 EDT 21 June.
A key item for discussion was the reunion of families separated during the Korean War. The delegations are expected to discuss the examination of whether all the lost family members are alive, exchange of letters, and visits by the families to their hometowns across the border.
South Korean President Moon Jae-in and DPRK leader Kim Jong Un agreed to hold a reunion around 15 August. That is the 73rd anniversary of Korea’s liberation from Japanese colonial rule (1910-1945).
This is the first discussion of separated families since late 2015. North Korea previously refused to engage in these talks until South Korea repatriated 12 North Korean restaurant workers. Supposedly their defection to South Korea in 2016 was coerced. The issue is likely to be raised, but it was not an impediment to the first session of talks.
Kim agreed to these talks at the 27 April Panmunjom summit with President Moon. He is delivering on this commitment.
Remains of US soldiers
News services reported that North Korea plans to transfer the remains of 200 US soldiers to the US in the next few days. That is a commitment Kim made to the US President at the Singapore summit. The US Defense Department carries 7,702 US military personnel as unaccounted for from the Korean War.
Heavy is the Head that Wears the Crown

Sources of The Daily NK, the defector daily published in Seoul, continue to report on the extensive security measures that the regime put into effect during the 70 hours Kim was in Singapore. They suggest that Kim’s worries ranged from public protests of his policies to plotting against him.
The latest reports indicate the security measures during the special security period were more extensive than first reported. Even North Koreans considered them excessive.
According to one source, Kim took the Minister of the Peoples Armed Forces and some of the senior Central Committee members to ensure they could not plot against him. He deliberately had them shown in televised imagery.
The measures included restrictions on movements by selected individuals and vigilance against whispering campaigns.
A separate source said Kim ordered the temporary confiscation of cell phones of senior officials and returned them the day he returned from Singapore. This measure supposedly was to prevent them from conspiring against him.
The armed forces were confined to barracks, but units were assigned officers from the Ministry of State Security to supervise them. Normally, the armed forces security units enforce special period restrictions on the armed forces.
Finally, Kim appointed no one in charge of North Korea in his absence.
As usual the sample is limited. Some of the restrictions are normal when the Supreme Leader leaves the country. The explanation for some of the measures – that Kim is worried about plotting –cannot be confirmed but is plausible. Kim’s uncle Jang Song Taek was executed in 2013 for plotting against Kim Jong Un, with Chinese support.
Kim Jong Un had his half-brother Kim Jong Nam assassinated in Kuala Lumpur, Malaysia, in February 2017, allegedly for plotting with Chinese government elements to replace Kim Jong Un.
The North Korean image managers present Kim Jong Un as a self-confident and competent leader who can deliver on his commitments. That probably is not entirely accurate. Despots always need to worry about plotting. Kim might be paranoid, but the plots have been real.
In the near term, the best measures of Kim’s confidence and his sincerity will be his willingness to discuss details of his nuclear program. I remain skeptical that he has the stature and authority to give away state secrets in return for peace, even with unification, without generating significant internal opposition. This interlude of relative peace is risky for Kim.