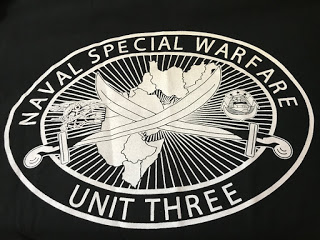 Salt Water
I ran into a Navy Master Chief, who I worked with when he was a third class hull tech (before the Special Operator Rate was created) the other day in Ace Hardware. It lasted about five hours as we brought each other up to speed. It’s as if the years roll away and you palaver on. It also made me feel a bit old. Master Chief retired, and the second x took his dog, his truck, a piece of his pension, and what equity there was in the house. Sounds grim but since the only easy day was yesterday, he didn’t ring the bell and he pushed through it. About a year and a half ago, he met a widow with a zillion dollars in the bank, they married and he’s driving a new Dodge 350 with a turbo diesel. She’d been looking for love in all the wrong places and when she found him he had to knock some heads to fix things. Now he’s doing well with his new dog and his manse, living in a vineyard in La Cresta (nice area, inland from Camp Pendleton) that the ball and chain (a former Miss something about 40 years old) owns and he is happy as a hog in a wallow.
One thing led to another and I followed him over to his place, which is not that far from my temporary housing in CA while the WWM is completed. We have a range day planned for next week before I haul off to Great Britain.
His last command was Naval Special Warfare Unit Three (NSWU-3) in Bahrain (core of the Naval Special Warfare Task Unit in the Persian Gulf). NSWU-3 employed the largest number of SEALs and SWCC in history during OP: Iraqi Freedom. We’re both XXL size guys and he threw me a new t-shirt from a stack three or four. He also threw me one from a recent BUDS class.
His chef (wife doesn’t cook – doesn’t need to) threw some ribeyes on the grill and the caulking-off continued. We talked about different people, some of whom are on the map, some of whom are off the grid, some are dead. He’s about eight years younger than I am, and had wondered if I’d shuffled off that mortal coil. When I left the Navy, I vanished into the black ether.
There was some sort of reunion back East at Little Creek a few weeks ago. Neither of us do that sort of thing. It’s mostly retired guys living in Virginia or people networking for a retirement job who attend.
His trophy wife showed up before the steaks were finished and she was far more humble and beautiful than I’d counted on. He has a keeper.
I share this story because I like to see a happy ending. It may not mean much to y’all, but sometimes, when times get nasty, you just have to push through the trouble to the other side because the pendulum swings in two directions. And that’s the sermonette.

Sermonette Thought of the Day

This one comes from Ted Nugget:

“Liberals keep talking about a civil war. One side has 8 trillion bullets. The other doesn’t know which bathroom to use.”

Enough said about that.

The Problem with Detroit is Identified (by way of sermon)

David Manning a pastor in Harlem, describes why things won’t work no matter how much money you throw at the city. Manning shares his opinion of Barack Obama. And this ends your sermonette.