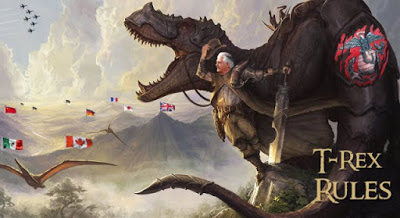 I’m working out of a US Embassy at the moment and there is a lot of teeth gnashing over the work that Rex (T-Rex) Tillerson is doing to reduce the size and wastefulness of government and to drain the swamp.

He could only do what he’s doing with the full and complete support of President Trump.

The  Foreign Service and condescending DC elites cannot fathom why they are unable to stop Secretary of State Rex Tillerson from streamlining the mission of State. They keep reporting that President Trump is going to fire the T-Rex and the Washington Post duly relates their predictions to the (gullible) American public. It’s trumpeted by the corrupt, lying, sly, smug, filthy mainstream media on every channel. But it still doesn’t happen…what can be done?

The minions of the T-Rex start with two questions that are put to State Department drones:  “What is your specific and quantifiable value to the core mission of the United States Department of State; and how do we measure your effectiveness therein? Go ahead and write down your answer. Here’s a piece of paper and a cheap pen. I’ll wait.”
“HOW DARE YOU ASK (you cretin)!!!????” The question is offered in reply with a quivering lower lip.
The truth is that we spend billions/trillions on absolutely nothing, but it’s been a place for protected pets for a very long time, many with degrees from Harvard and the Ivy League. Some are Skull-and-Bones Yale people who had an implicit guarantee that they’d be set for life, would be paid a princely fee and wouldn’t have to do anything but sit on a committee that deals with interruptions in bird migration patterns or some such. T-Rex doesn’t care any more than a Jurassic tyrannosaurus rex would.

(The Conservative Tree House) No-one, repeat NO-ONE, could have pulled off what T-Rex is accomplishing except T-Rex himself; with the full support of President Trump, of course. The former leader of the worlds largest private business, Exxon-Mobil, is now systematically bringing efficiency and effectiveness to the worlds largest public institution, the State Dept.

The lack of reasonable answers within the bureaucratic ranks is leading to massive downsizing.

Making America Great Again means Making Interventionism Irrelevant Again – The New York Times outlines why the diplomatic retention of irrelevant snobbery is vital to those within the State Department’s cocktail circuit influence network. At the rate Tillerson is going he might even eliminate the entire staff for the Assistant Cultural Ambassador to the U.N. Center for Biodiversity and Southern Hemispheric Aquatic Species Rights. That’s the threshold where things are really going to get ugly:

New York Times […] For those who have not been dismissed, retirement has become a preferred alternative when, like Mr. Miller, they find no demand for their expertise. A retirement class that concludes this month has 26 senior employees, including two acting assistant secretaries in their early 50s who would normally wait years before leaving.

The number of those with the department’s top two ranks of career ambassador and career minister — equivalent to four- and three-star generals — will have been cut in half by Dec. 1, from 39 to 19. And of the 431 minister-counselors, who have two-star-equivalent ranks, 369 remain and another 14 have indicated that they will leave soon — an 18 percent drop — according to an accounting provided by the American Foreign Service Association.

The political appointees who normally join the department after a change in administration have not made up for those departures. So far, just 10 of the top 44 political positions in the department have been filled, and for most of the vacancies, Mr. Tillerson has not nominated anyone.

“But–but–but,” the global elite sputter at the club, sloshing down their third Singapore Sling and chomping down a sweet-and-sour shrimp, “what about the new One World Government that we’ve been working to forge?”
“Sorry. If it doesn’t make America great again, there is no job. Maybe you can find work bad mouthing the President at Cal Berkeley?”
Are the Kennedy Family
Appointees Safe?
Please, don’t tell me that even the Kennedy family is on the chopping block! This is a sermonette, not a horror show.

Even before Mr. Tillerson was confirmed, his staff fired six of the State Department’s top career diplomats, including Patrick Kennedy, who had been appointed to his position by President George W. Bush. Kristie Kenney, the department’s counselor and one of just five career ambassadors, was summarily fired a few weeks later.

The liberal panic at the deconstruction and realignment of their most cherished institution (run by Hillary herself) has been the topic of discussions in elite clubs from New York to DC (which is where everyone whose anyone is – unless they’re vacationing in the Hamptons or at Martha’s Vineyard) — or meeting with George Soros at La Costa (San Diego, California) as happened this past week.

“There is nothing more difficult to plan, more doubtful of success, nor more dangerous to manage than the creation of a new order of things. … Whenever his enemies have occasion to attack the innovator they do so with the passion of partisans, while the others defend him sluggishly so that the innovator and his party alike are vulnerable.”– Nicolo Machiavelli