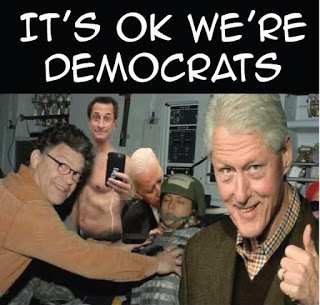 If you are a celebrity or a politician (the same thing in many cases) and you’re a pervert, you may need to come up with an apology quick. This link my help.

This is one of many possible apologies: As a male feminist, I feel tremendously guilty now that the things I did have been made public. I imagined that any woman would have been thrilled to see a tiny penis peeking out from below my pasty, middle-aged paunch like the head of a geriatric albino turtle moments from death, and of course now I realize my behavior was wrong. In conclusion, I will wait 2-3 years before reappearing in film and TV and just sort of hope you all forget about this.

I found Bill Clinton’s denial (lie) to Congress to be more to the point and more fun, truth be told, “I did not have sexual relations with that woman.” — She didn’t clean the (crusty) blue dress, Bill — “Oh $%&#!”
Capitalism Works
(LINK) On or around this day in 1621, the Pilgrims enjoy a three-day feast! They are grateful for their harvest after a long, hard first year in the New World.
You already know that the Pilgrims fled England because they feared religious persecution. Their voyage on the Mayflower began in September 1620—and it was a rough one!
“In many of these storms the winds were so fierce, and the seas so high, as they could not bear a knot of sail, but were forced to heave to for many days together,” the future Governor of the colony later wrote. “And in one [mighty storm] . . . a strapping young man (called John Howland) was, with a lurch of the ship thrown into the sea; but it pleased God that he caught hold of the ropes which hung overboard.”
Howland was pulled back into the boat and survived!
Can you imagine how grateful the Pilgrims must have been when they finally arrived in America? Almost all of them had made it—including a baby born during the journey! Unfortunately, the Pilgrims would not be as fortunate in the year that followed.
They had arrived in the midst of winter: For months, they would face problems on several fronts. How to build shelters? How to get food? How to nurse the many people who were falling ill during the harsh winter months? How to make peace with local Indian tribes? Some of these tasks they accomplished on their own, but they also owed much to an Indian named Squanto. Fortunately for the Pilgrims, Squanto spoke English. (The skill had not come easily for Squanto, who learned the language because he’d spent time in captivity in England.)
By September 1621, only half of the original 102 Pilgrims had survived, but they’d also learned much about how to live in the New World. They owed a debt of gratitude to Squanto, who taught them how to raise crops in the New England soil and climate. They’d also worked out treaties and were living in peace with many of the local Indian tribes.
As the first harvest came in, the Pilgrims were surely happy to enjoy a feast with their new Indian friends. They shared deer, ducks, and turkey. A recently harvested barley crop meant that it would have been possible to (finally) brew beer at about this time!
For many reasons, the feast was welcome after the long, difficult year. But, despite the good meal and happy times, the overall harvest was not as plentiful as you might imagine. Nor was it plentiful the next year. In fact, the Pilgrims were still really struggling until 1623 when their governor, William Bradford, made an interesting decision.
He changed from a communal system of growing crops to a more private one. Each household was given its own private plot of land. In essence, he changed from a socialist-type system to a more capitalist one.

“[T]hey began to think how they might raise as much corn as they could,” Bradford later explained, “and obtain a better crop than they had done. . . . And so assigned to every family a parcel of land . . . . This had very good success, for it made all hands very industrious, so as much more corn was planted than otherwise would have been . . . . The women now went willingly into the field, and took their little ones with them to set corn; which before would allege weakness and inability . . . .”