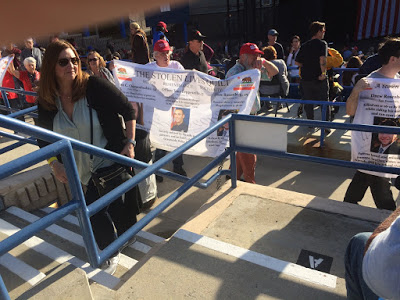 Facebook
Twitter
Pinterest
WhatsApp
Continued from part one
The demographics of the crowd were split between men and women about 50/50, with a median age of about 35. There were many older and many younger. As is true of Orange County, about 90% of the people attending were white or of Hispanic origin with the remainder either black or Asian persuasion. I didn’t see any Muslims wearing traditional clothing.
In line on the way in, about 75% of the people standing near me were women. I asked them why women didn’t like Trump. It was the only time that I “felt threatened” as they – to a one – went off on how that is a pack of mainstream media lies. “How can you swallow those lies?” One lady asked sincerely. So much for the answer to that question.
A lot of men came from work and wore suits and ties, one lady standing next to me, in the photo from ‘part one’, must have had $100K in diamond rings and things. She was there with her son. Her husband (a plastic surgeon) dropped them off and would pick them up afterward. A lady standing in front of me wore a single strand of pearls. This is Orange County, and it’s definitely not the Rust Belt. The people around me all appeared to be college educated. The men that I spoke with were stock brokers, doctors, an architect, a civil engineer, an off-duty police officer and a man who owns a factory. The women mostly worked or were trophy wives…The OC, right? There was a high percentage of attractive women in attendance. Not the toads and crones that you generally associate with a Sanders crowd.
A group of people whose family members had been murdered by illegal aliens in California staged a mini-demonstration by parading their banners through the crowd. The Stolen Lives Quilt received a standing ovation and later ended up on stage with Mr. Trump.

In response to Fredd’s question: Inside the venue the crowd was respectful and there was no trash on the ground. The same was true of the entryway into the arena on my way in.  On the way out I didn’t see any trash on the ground either, but the police kept the protestors away from the area where the thousands of Trump supporters stood waiting in line to get into the event.
I heard that a protestor threw a rock through the window of an Orange County Sheriff’s Department car at sometime during the event, but we didn’t see any of that inside the venue. As with the Tea Party rallies of seven years ago, people were respectful of others, were generally friendly and used restroom facilities. There were porte-potties available to the protestors (and those in line to attend the rally) outside. I didn’t see scat on the ground on my way out, but there were a lot of people.
Near the venue I only saw about a dozen protestors, all Mexicans, carrying Mexican flags. Apparently they were representing the open border and free cheese crowd. They were surrounded by the news media, who were in turn surrounded by Sheriff’s deputies, including about 8 mounted on horseback. There were another two dozen protestors on Fair Drive as I left the event, a couple of the signs compared Trump to Hitler.
I didn’t see anyone smoking anything at the event. The Trump supporters (as one would expect) looked to be the ‘backbone of America’ type of people.
The people sitting next to me went for sodas and snacks and bought me both. I tried to pay them but they refused to take money. Such was the mood of the crowd. They were happy, they felt comfortable together and they all felt that America’s greatness was in jeopardy.
There was some sort of protestor activity outside that delayed Mr. Trump’s speech for a few minutes and then he took the stage. Euripides, he owned the crowd. It wasn’t one of those religious tent style charismatic ownership things. These were people who wanted to see jobs brought home to America, who wanted some hope for a brighter future and felt that Donald Trump could help solve the Washington problem. They weren’t a crowd of unsophisticated and under-educated people by in large.
Trump’s speech was what I heard elsewhere on television or read in the media with the exception of his discussion of General John J. (Black Jack) Pershing’s actions during the Moro Rebellion. Since the Moros were Islamic, he related it to Pershing’s response to Radical Islamic Terrorism.

(Wikipedia) Pershing is the only American to be promoted in his own lifetime to General of the Armies, the highest possible rank in the army; a law passed in 1976 retroactively promoted George Washington to the same rank but with higher seniority, ensuring that he would always be considered the senior ranking officer in the Army. Allowed to select his own insignia, Pershing chose to use four gold stars to distinguish himself from those officers who held the rank of General. After the creation of the five-star General of the Army rank during World War II, his rank of General of the Armies could unofficially be considered that of a six-star general, but he died before the proposed insignia could be considered and acted on by Congress.

Mr. Trump said that General Pershing lined up 50 Islamic terrorists. Then he had two pigs brought forward and slaughtered in front of them. 50 soldiers, opposite the terrorists all dipped their bullets in the pig entrails and loaded the cartridges. They then executed 49 of them with the pork-infused rounds and gave the 50th man a cartridge covered in pig blood and excrement and told him to take it back and explain what he’d seen. Trump said that while we find it difficult to do that today, it ended the violence in the Philippines for 42 years. 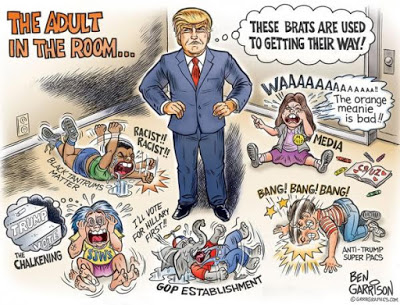 He brought up water boarding, which I consider to be moot. Every US Military member who goes through Search Evasion Resistance Education (SERE School), is water boarded and treated in the same way that the US prisoners in the “black sites” were. You can call it torture if you must, but people like fellow blogger Old NFO and I have been through it as have many tens of thousands of other Americans.
The rally was fun, the people there were fun and very much of one mind. The event was peaceful and collegial. I realize that there were ‘wet backs’ protesting outside of the venue and various and sundry paid agitators, bussed in, given a sign, $40 in cash and a box lunch – wrappers left on the ground, but it didn’t reach inside to the event.