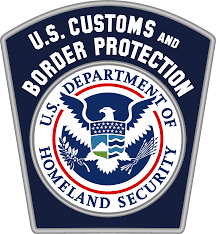 I have a Sentri Pass, which means that I can zip across the US/Mexico Border. However yesterday, my colleague’s car broke down and he had to take one that is not listed on Sentri. There are rules that require that the driver be connected with the car by CBP. So on the way back to the USA, we both had to sit in a three hour line to cross even though we both have Sentri passes.

Yes, a ten minute crossing was extended to three hours. I could get upset or I could amuse myself. I chose amusement and what better to do than to share the crossing experience (in part) without the smells with the blogosphere and the dozen or so people who drift by my little corner on a Friday. 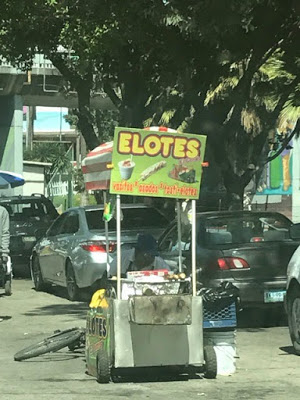 There are food stands between the lanes selling delicious sweet and savory morsels. It doesn’t translate without a few photos.
Non-stop traffic widens to pass the carts. The cart (left) sold bar-b-que corn-on-the-cobb that looked to be at least day-old. Delicious? I wouldn’t know. I took a pass.
As I got closer and passed the cart, I could see fingerprints on the cobs. The cart owner may have been licking the butter and salt off, leaving the basic corn kernels intact. But that’s only speculation on my part.
Welcome to Tijuana and welcome to the Federal Republic of Mexico. 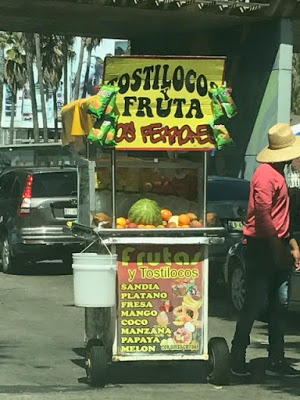 The Tostilocos are a combination of cut up fruit. The fruit is withered and the hands that cut it are unwashed. Once in the plastic cup, a sugary slime is poured over the fruit. Flies are present everywhere but if you are able to eat a fly, it’s protein, right?
They were doing a brisk business as locals, whose intestinal tract has the proper aggressive bacteria present, were scarfing it down. The fruit itself looked to be the fruit that the market threw out as rotten. I’m sure that was the case. The watermelon didn’t look too bad, but the giardia that is present from hands that don’t wipe after dumping will ruin any day/week.
There is an implicit promise that you won’t have explosive diarrhea while in the line – but the line is three hours long, sitting in  your car, and the promise, delivered in Spanish earnestly, may be a lie. I did not test the lie for your benefit. I like all of you, but not that much. 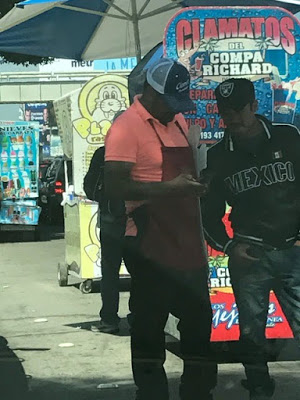 The Clamatos could frigging kill you. They start by mashing up rotten tomatoes until they are pulped (skin remains) and add jalapeños and habaneros with seeds. Then they mix in shell fish (a melange) and top with sad looking shrimp.
There is no refrigeration, no health inspection, no promise at the Clamatos cart that you’ll make it to the border without erupting bowels.

But still they sell the product, incredibly.
I suspect skulduggery at work. If you should abandon the car to use the restroom – in line, they will move it along even if they have to hot-wire it to drive it to the turn-around and take it back to Mexico for you. 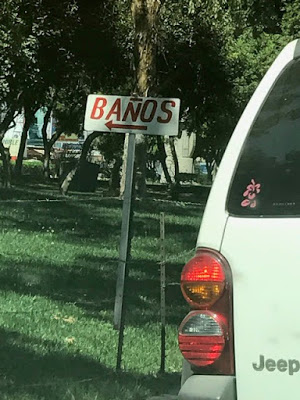 You can file a report of a stolen American car, but I don’t think that’s a crime. The local police might take a report if you pay them to do so. I can only hope that you didn’t leave your wallet or purse in the car.

Many of the cars in Mexico are US stolen. A lot of them are leases with too much mileage that are abandoned by American owners, across the border and then reported as stolen in the US.

Meanwhile, there you sit, in the filthy restroom with crabs climbing over your tender American flesh – and your car with all your goodies (and maybe your credit cards?) is on the way to Chihuahua.
With luck, you retained your passport in your run for relief. If not, it’s going to be a very long and miserable day indeed as the giardia, toxins from old shellfish and impossibly hot habanero peppers go to work on you while you try to explain what happened to the amused Customs and Border Protection Official.
This is Tijuana, and there is a BIG wall between the US and Mexico so there’s no hope of just crossing by merely stepping over a sagging two strand wire fence. You can hire a coyote to smuggle you across by handing him your $6,000 wristwatch and he might actually not take the watch and run. Or you can wait for CBP to call you a cab to take you to the US Consulate about ten miles away from the San Isidro border crossing, at Otay Mesa. Once at the consulate, there is a long line (if you have no passport or ID – a longer line) to wait and see a consular officer while the Clamato gurgling in your belly reminds you that your IQ is not as large as you once hoped it would be.
Antidote for civilization? Some people think so.