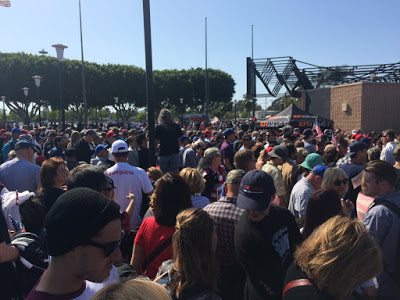 Trump’s NY style of approaching (almost everything) problems puts me off too, but there are a lot of people who have known him for 40 years who like him a lot. He has made billions by making good financial decisions and people who work for him like working for him. He expects results, but every CEO who wants to remain CEO feels the same way.

That was my mindset when I set off to attend a Trump Rally at Costa Mesa, CA and report on it to you blog readers. First, my general thoughts.

Kasich doesn’t hold rallies because people don’t show up. He holds “town hall meetings” of fifty or sixty people because he can attract that sort of attention. That’s not true with Trump.

There are assumptions that political scientists make. One such assumption, that voters follow the signals sent by party elites and officeholders. It is the basis of the famous “party decides” thesis in political science, which was invoked early and often to explain why Trump couldn’t possibly end up as the Republican nominee.

Except that’s not how it’s working out.

The GOP elites are working behind the scenes to run the nomination process to a contested convention where they can deny Trump (and Cruz and Kasich) the nomination.  Once Jeb! imploded, the party elite never managed to coalesce around an alternative (as of right now, only four United States senators have explicitly endorsed Ted Cruz) though they did take a stab at making Rubio their favored son until Trump destroyed him in his home state of Florida.

Before Trump, there were thresholds of ideological reliability and electability, and you had to clear both to be the  GOP nominee. That’s how things worked. But with a Congressional approval rating of 8% favoring them, the old guard’s credibility cracked.
Every ideological faction in the party regards Trump with mistrust, disgust, suspicion, fear. Pro-lifers, foreign-policy hawks, the Club for Growth, libertarians — nobody thinks Trump is really on their side. And yet he’s winning anyway. Or at least he’s winning a plurality. So perhaps Trumpism can be understood as a coup by the G.O.P.’s ideologically flexible minority against the conservative movement’s litmus tests; indeed to some extent that’s clearly what’s been happening. The elites maintain that he’s untrustworthy and unelectable — a combination that you’d normally expect engaged partisans to consider and reject. And yet he’s winning anyway.
Rubio is silent. I think that he’s waiting in the weeds in the hope that he can join Team Trump with his 127 delegates… I didn’t see any pro-Rubio people at the rally.

Obama should take a victory lap because more than anyone else, he created Trump. Eight failed years, the military weaker than it’s been since the Second World War began, 60 million people on food stamps, racial matters as tense as they were in the 1960’s, and a Congress that people find difficult to trust.

Ok, on with the rally. I arrived an hour before the gates opened and there were several thousand people lined up ahead of me. It took another hour (total of two) to make it through security once the gates opened and the best seats were taken but my seat was fine. The Pacific Amphitheater holds about 10,000 people with the overflow filled.  All of the seats were taken and there was standing room, but all of the seats were filled.

The Orange County Sheriff’s Department handled outer security and we heard (but I didn’t see) that people jumped a fence. They were promptly taken into custody.  There was another protester in a “Hillary 2016 t-shirt” who began to blaggard Trump (who hadn’t taken the stage). Security removed him.