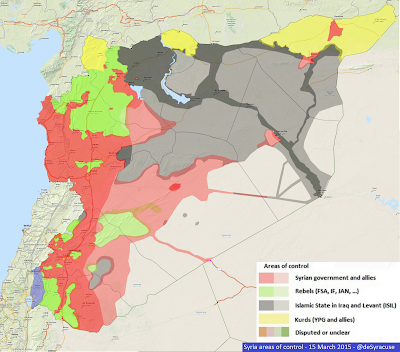 Facebook
Twitter
Pinterest
WhatsApp
Do we need to throw arms and treasure at opposition groups (opposed to Assad in Damascus; opposed to ISIL; opposed to Turkey, etc.)? There are clearly a lot of factions in Syria and the US is looking for somebody to love. Conventional wisdom in the West presently holds that the enemy of my enemy is my ally. In Syria the conventional wisdom of the West does not necessarily apply. The enemy of my enemy often proves to be my enemy as well, over time.

A lot of players have picked proxy groups to support in the hopes that the people on the ground in Syria will reward that support (arms, treasure, 15,000 Iranian troops, etc.) will mean something after they win something.
Some suggest that supporting the Syrian Kurds is a good move, but they are clearly not a standard-bearer of liberal Western democracy. The Syrian Kurds have now raised a yellow flag with a red star. Most of those who read this blog and all Syrians will recognize the significance of the red star as an emblem of socialism/communism. The Syrian Kurds evidently wanted to send the message that non-Kurds and Muslims of a different persuasion are not welcome.
Devout Sunni Arabs, Turkmens, other minorities and secular Arabs would find no reason to support openly pro-communist Syrian Kurds, but the US is trying to justify it. The Russians funnel a little aid here and there but are not committing to this sort of support openly because they are Assad’s ally and the Kurds want Assad out of Syria.
Does the US have a card to play in Syria that won’t get us into deeper trouble or that won’t end up causing more trouble in a deeply troubled region of the planet?
Not now. Maybe not ever. Clearly in the short term there are pre-modern tribal groups (such as the Syrian Kurds – as opposed to Iraqi Kurds) which are each trying to stake a claim. Some identify with a communist movement, such as the Syrian Kurds, others, such as ISIL are claiming Sunni Islamic orientation, and in ISIL’s case, are fighting the Syrian faction of Al Qaeda (backed by the Saudis) – also claiming Sunni Islamic Orientation. There are the Alwites, backing Assad’s secular government, the ever present Shiites who are proxies for Iran, etc.
US Senators (Graham and McCain) contend that anyone is preferable to ISIL. I don’t know that it’s true ultimately, but containing ISIL is good. However, America needs to remember that anyone in that part of the world that we support (with the exception of Israel) likely has the destruction of America as one of its long term goals.
Until or unless we can find somebody in that country who doesn’t want to see us all killed, maybe se need to stand on the sidelines? At the moment we can drop a bomb anywhere in Syria, confident that whoever we kill hates us.