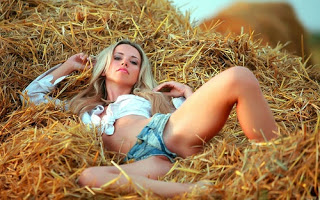 Once upon a time there was a traveling salesman who stopped at a farm house for the night. It wasn’t a normal night. It wasn’t a normal traveling salesman, and the traditional pretty daughter wasn’t quite what you’d call normal either.
On the other hand, the farmer, was precisely who you’d expect him to be. A big-hearted man with a wife who lived for her man and her family. Naturally, they invited the salesman to spend the evening without even once considering that it was Halloween.
Trick-or-treaters didn’t venture as far out as the farm. It would have been a long journey for a single caramel apple or a piece of hard candy. The army of grammar school children dressed as ghosts, Superman or Cinderella stuck to more traditional neighborhoods where many homes could be canvassed in that single night-of-nights that dentists cherish above all others.

Millicent, the farmer’s daughter, was in the full bloom of young womanhood and it might have worked out better for all concerned if she hadn’t been delayed one evening in the woods after picking berries for a pie. You see, there are caves in that region and one of them was home to some very sick bats. Milli ran afoul of the bats, which were not rabid, but had been infected by something much darker, far more incurable, substantially more dangerous. The attack came and went with some scratches and bites that miraculously healed by the time she arrived home. Her emotional distress, while profound when she slammed through the front door of the farmhouse, screaming and blubbering had also passed, with scarcely a memory. Her mother and father were certain that she fell asleep on the warm late spring day while picking berries and had a bad dream.

The virus coursing through her veins was no dream, though at the time it remained dormant, marshaling its resources.

On that windy All Hallows Eve, the family shared an early evening supper of pot roast and late autumn roasting ears, freshly dug red potatoes and jars with grandpa’s squeeze inside to gentle the evening. When Ma mentioned the full moon that would rise later in the night, the traveling salesman winced sharply, but he produced a bone from the meat and set it gently in his napkin. Coincidences such as that one are common to families prone to idle talk at dinner.

Nobody recalled the salesman’s name but he sold medical bandages and related technology. That he’d strayed so far from the hubs of the medical industry on that Halloween night struck no-one as strange, though some maintain that it is germane to the story.

As the Blood Moon rose on that fateful evening the virus that coursed through Milli’s veins screamed that it was time for the demon to be conceived within her womb, and the mate to be devoured as had happened in antiquity. Unfortunately for the salesman, he fell into the hay in the barn with Milli, following the script to the letter. Fortunately for him, he’d been dead for several thousand years, a resurrected mummy from a crypt on the banks of the Nile. As such, he was completely sterile and the taste of the putrid flesh under the white, scrubbed, skin was so odious that she wasn’t able to take more than a single love bite. 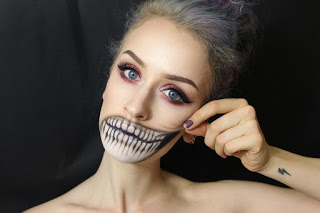 You can’t always get what you want, but if you try sometimes, you just might find — you get what you need (or not).