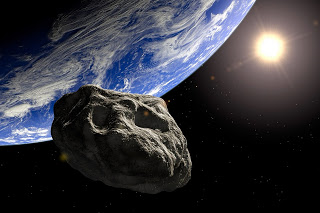 Facebook
Twitter
Pinterest
WhatsApp
This is your Halloween Sermonette. File it under “repent, the end is near” or any way that your conscience lets you slice it.

Twenty-one days ago, a large object, capable of doing significant damage if it were to strike our planet, was discovered by NASA. The asteroid, estimated to be about 1,300 feet (400 meters) in diameter, will shoot past the planet at 22 miles (35 km) per second at around 1 p.m. (1700 GMT) today, on Halloween afternoon. Known as 2015 TB145, it will come within about 300,000 miles (480,000 km) of Earth, farther away than the moon but relatively close by cosmic measures.
Close encounters with asteroids can cause gravity captures and they can fall into Earth orbit, they can simply pass us by as 2015TB145 is expected to do, or a near-Earth encounter can alter the orbit of the asteroid such that it leads to an impact at a future point in time.

Small space rocks rain down on Earth constantly, with most disintegrating as they blaze through the atmosphere.
About 65 million years ago, an asteroid or comet roughly six miles (10 km) in diameter crashed into what is now Mexico’s Yucatan peninsula, triggering global climate changes that killed off the dinosaurs along with about 75 percent of life that existed at the time, scientists say.
More recently, a 65-foot-wide (20 m) asteroid broke apart over Chelyabinsk, Russia, in February 2013, shattering windows and damaging buildings. More than 1,000 people were injured by flying debris.
The damage that asteroids cause is proximate to their composition. Some are composed of gravel, bound together by very weak gravity. Others are made of iron and other heavy metals and are unlikely to break up on entry and auger in at speeds exceeding 25,000 miles-per-hour. An impact by an iron meteor 1,300 feet across (the near miss on Halloween), would far exceed the damage caused by the nuclear bomb dropped by the US on Hiroshima, Japan during the Second World War.
Airburst event: Chelyabinsk, Russia, February 2013