Nice Terror (not all that nice) 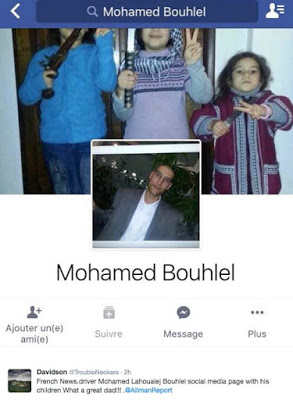 Facebook
Twitter
Pinterest
WhatsApp
White House Press Statement: “In a traffic jam, turned deadly, a white truck wildly careened down the streets of Nice, France, killing 84 and injuring well over a hundred more celebrants following their Bastille Day fireworks. Nobody is certain what made the truck go berserk, but race has not been ruled out, and neither has the specter of workplace violence.”

French Police shot and killed a Tunisian, Mohamed Lahouaiej Bouhlel, who emerged from the truck mentioned above shouting Allah-u-Akbar (or Aloha Snackbar) and shooting. While some speculated that Mohamed may be a Muslim, the White House and members of the progressive media urged people not to jump to conclusions.
The photo (right) of Mohamed Bouhel’s children holding weapons and giving the ISIS salute is considered inflammatory. Pay no attention to it. While the ‘vast right wing conspiracy’ in the USA is showing it as an inclination of a member of ISIS to do what other members of ISIS have been doing in France, Barack and Hillary are both calling for calm and for allowing MSNBC to have the time that they need to cover the story (up).
Both the terror attack in Nice and the coup-de-etat in Turkey have had tragic consequences in the US because the Negro Day of Rage scheduled for July 15 came and went with nobody in the media covering the demands that they had.