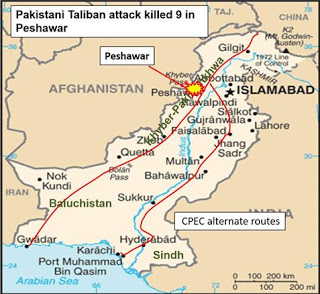 On 6 December, the Korean Central News Agency (KCNA) published anti-US remarks by a Foreign Ministry spokesman. I’m only going to quote a few.

“These confrontational warmongering remarks cannot be interpreted in any other way but as a warning to us to be prepared for a war on the Korean peninsula.”

“Worse still, the CIA director has made a provocation against us by impudently criticizing our supreme leadership which is the heart of our people.” (calling him “Little Rocket Man” or the “Fat, Dumb Kid with the Bad Haircut” is demeaning? What about ‘accurate’?)

“This is the revelation of the U.S. cunning and heinous intention which is to instigate our strong countermeasures and use them to ignite the fuse for a nuclear war on the Korean peninsula.”

“If the U.S. does not want to be burnt to death by the fire it ignites, it would better behave with prudence and caution.’

This comment carries the approval of the Foreign Ministry. Most recent comments have been by various North Korean Ambassadors, who restated established propaganda themes.
This statement implies that North Korean intelligence can no longer distinguish demonstrations from real war preparations. Its conclusion apparently is that the US has made a decision to go to war on an undetermined date. Its advice is that North Korea must be prepared.
One significant remark is the statement “we do not wish a war…” This is the first time in months that the North has made that point. The success of an extortion operation is to get something significant at little or no cost.
The North Korean regime is serious about not wanting a war. It would represent a negative return on the expense and energy North Korea has invested in the strategy to neutralize the US in a reunification bid. It would call their bluff, but the North Korean leaders would order national suicide rather than lose face by backing down.
Chinese Reaction
Chinese forces recently conducted an unusual exercise near Korea. Air force spokesman Shen Jinke made the announcement at an airport in northern China on 4 December. The South China Morning Post (SCMP) article made the correlation that the Chinese exercise was announced the same day the US and South Korea began their biggest joint air force exercise.
Shen said Chinese combat aircraft flew in airspace they had never flown before. He also said that this kind of training would become a regular feature as the air force worked to strengthen its capabilities so that it was ready to safeguard China’s strategic interests.
The SCMP article quoted “Chinese military expert” Li Jie who said the drills were intended to show that the People’s Liberation Army Air Force was making strides in joint operations, which are an important part of modern warfare.
Li also said that Monday’s announcement also was aimed at sending a message to the United States and South Korea.

“The timing of this high-profile announcement by the PLA also is a warning to Washington and Seoul not to provoke Pyongyang any further,” Li said.

Senior Captain Li Jie is a naval strategist and military expert with the Chinese Naval Research Institute. Our searches found that his comments are infrequent, but authoritative. He has been making them at key moments since at least 2010.
The Chinese use military exercises to send political messages, especially to Taiwan. Li makes comments when the Chinese leaders need to be sure that a behavioral message is clear and understood by a target audience. In this case, the targets are the US and South Korea.
The message is stark and highly unusual, something that would be inappropriate to state officially in public. However, it almost certainly has been conveyed in verbal communications between Chinese and US officials. The exercise and its public announcement reinforce the gravity of the Chinese message.
Last spring the quasi-official newspaper Global Times published the conditions under which China would intervene in a Korean conflict or would refrain from intervening. It restated long-standing Chinese policies.
China would prevent the collapse of North Korea under almost all circumstances. If the US and the US allies fired the first shot, China would aid and defend North Korea and ensure that it did not collapse.
If North Korea started the war, China would not intervene to prevent a US counter-attack. However, it would intervene to prevent the US from devastating North Korea. China also would intervene to keep North Koreans in North Korea during a war.
The exercise details and Li’s remarks in the SCMP article suggest two scenarios worry the Chinese leadership. The first is that the North Korean leadership is likely to misread US actions as precursors to an imminent attack, rather than as demonstrations.
The second scenario is that the US actually has decided to conduct an attack on a target or set of targets in North Korea.
The article also suggests that the Chinese judge that demonstrations of US power have reached the point of diminishing returns and the US knows it because the Chinese have told the US. Thus, the Chinese analysts are interpreting the scheduling and conduct of more and larger US and allied exercises can only be interpreted as war preparations under cover of exercises.
Thoughts: It’s clear that the Trump Administration knows that the Norks are concerned and would prefer to see them fire the first shot, which would provoke the sort of decapitation and degradation of Nork forces that are planned. And the Chinese know what the US knows. The question becomes one of what will make the Norks act rather than just talk? Or maybe they launch a missile and it inadvertently lands in Japan the way that the last one almost did?
Pakistan
China is hedging on the China-Pakistan Economic Corridor. Pakistan’s Dawn newspaper reported on 6 December that China temporarily stopped funding three major projects of the China-Pakistan Economic Corridor (CPEC). The three are road construction projects that are essential to completion of the Corridor.

The Chinese announced the temporary suspension at a 20 November Joint Working Group meeting, which was supposed to finalize the projects. The Chinese delegation said that the funds would be suspended pending ‘new guidelines’ to be issued from Beijing.
The Dawn article reported that Pakistani officials from the National Highway Authority were stunned by the surprise announcement. The reason for the suspension is Pakistani corruption in distributing about $1 billion in Chinese investment funds for land acquisition and road construction.
Pakistani businessmen have expected the CPEC project to provide a bonanza of wealth for Pakistanis. That is not how China manages these projects, for which it has long experience in Africa. The projects are set up so that Chinese companies profit and local companies get the spill-over.
I anticipated that terrorist attacks and other security challenges would undermine and compromise the CPEC. Pakistani corruption has proven to be the greater, more immediate and less easily managed threat.
Syria-US
The US military stay in Syria is open-ended. A US Defense Department spokesman said that the US is committed until there is an “enduring defeat of ISIL.” A Defense Department spokesman also said that the US has roughly 2,000 troops in Syria and 5,200 in Iraq.

“While the nature of US support to partner forces will adjust as the coalition shifts from major urban combat operations to stabilization tasks, US support will not end until the enduring defeat of ISIL and will be determined by conditions on the ground,” Pentagon spokesman Eric Pahon said on 5 December.

The US said it would continue to support its local allies, the Syrian Democratic Forces (SDF), as they move to stabilize eastern Syria. “We are going to maintain our commitment on the ground as long as we need to, to support our partners and prevent the return of terrorist groups,” Pahon said.
The Turks use almost the same language to justify keeping their forces in Syria in order to fight the Syrian Kurds. As a terrorist organization, ISIL’s permanent defeat can only be assured by permanent operations against them because the organization is self-regenerating. The Syrian Kurdish militias also are self-generating. The language of enduring defeat means open-ended.

The rough number of US soldiers in Syria is four times more than the number released in late November. The statement of continuing support for the SDF is likely to infuriate the Turkish leadership, who says they have assurances to the contrary from the US President.

Six Russian long-range bombers struck Islamic State (IS) targets in Syria’s Deir ez-Zor province, according to the Russian Defense Ministry.
The TU-22M3 bombers took off from a base in Russia, flew to Syria and bombed IS targets as well as weapons and ammunitions depots, they said.
The last TU-22 bomber attacks occurred in late November. The Russians are taking advantage of air attack missions in Syria to maximize the flight and combat experience of their bomber crews. On the other hand, the continuing bomber attacks are strong indicators that the defeat of IS fighters is still not final.
The bomber attacks tend to contradict Russian President Putin’s statement that complete victory has been achieved over the Islamic State.