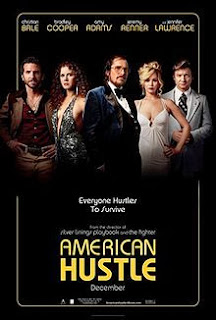 American Hustle opened to very positive critical reviews and so I went to see the film — and was disappointed. The cast and the acting was impressive. The script and the premise of the film simply fell short and was — well — boring.
The film is based on the FBI’s ABSCAM Group 1 undercover operation (1978) in which members of Congress were targeted in a public corruption investigation. Of the thirty-one targeted officials, one senator, Harrison A. Williams (D-NJ), and six members of the House of Representatives John Jenrette (D-SC), Richard Kelly (R-FL), Raymond Lederer (D-PA), Michael Myers (D-PA), Frank Thompson  (D-NJ), and John M. Murphy (D-NY) were convicted of bribery and conspiracy in separate trials in 1981.
It’s one of those situations where Hollywood writers/directors take a factual situation and try to make it funny by making the cops look stupid. The movie enters the theater of the absurd and that’s how it ends up playing out — absurd. And it’s not only absurd, it’s slow. When I go to a movie, I usually suspend disbelief, and I personally enjoy a wide variety of films.
Mistakes:
Verdict: If you’re going to a movie because you’re bored, this will only bore you further. There were elements of this film that reminded me of a “French Movie”.