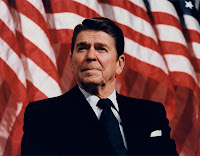 I listened to a news station other than Fox this morning and a liberal goofball talking head asked a question to a conservative person in a point-counter-point format. He asked, “Do you Teabaggers want to return to the days of Ronald Reagan?” The way he posed the question, it sounded as if he thought that would be a bad thing. I blurted out the obvious response, “YES” that’s precisely what we would like to see happen.

He took a hard line against labor unions, and had no fear of ordering both covert operations by the CIA and overt military responses where called for. Publicly describing the Soviet Union as an “evil empire”, he supported anti-Communist movements worldwide and spent his first term forgoing the strategy of détente by ordering a massive military buildup in an arms race with the USSR. Reagan negotiated with Soviet General Secretary Mikhail Gorbachev, culminating in the INF Treaty and the decrease of both countries’ nuclear arsenals.
The contrast between Ronald Reagan and Barack Hussein Obama couldn’t be more stark. With Obama, we have a craven, apologetic worm of a man who even the Europeans repudiated as weak and lacking credibility in all respects whose idea of job creation is increased taxation to fund FEDERAL employment.
Obama is the darling of the American communists (not Russians or Chinese who consider him a joke) where Ronald Reagan was their enemy. Obama is the pet of the liberals where Reagan and his record of success and popularity is the opposite. Ronald Reagan was Kryptonite to the Liberal Movement.
Yes, we need another Reagan. And we need that person NOW.