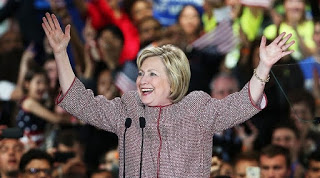 Facebook
Twitter
Pinterest
WhatsApp
I think that Hillary Clinton would be well served by affiliating with James Comey in an even more official capacity by appointing him to serve as her attorney general or perhaps including him in her run for the White House as her choice for vice president. The pretense at a rule of law vanished and with it the capacity to rely on codified statutes as a guide to conduct. Now, laws change from day to day and hour to hour, so that whether you are punished or vindicated does not depend on what you do, but who you know, or how much you are able to pay. I don’t know whether the payment to FBI Director Comey was a direct payment, a future position or merely the promise to allow him to live out his natural life without a premature termination. Or maybe Comey sold out more cheaply to the mantra of “too big to fail”? It’s difficult to know what happens behind closed aircraft doors or in those mahogany-paneled walls of executive government offices.
I can only hope that Comey didn’t sell his birthright for a bowl of pottage.  (Genesis Ch 25:29-34) I’d feel far more comfortable if he got whores, drugs, a foreign villa and perhaps a yacht with great towers of cash and gold bullion. The Clintons would have rendered all that and more for his indifference. After the FBI’s abdication of the Rule of Law (with the exception of those laws they choose to enforce on selected “enemies” of the Party), the government will be engaged in a power struggle and none of them has any worldly reason to trust any truce, seek any reconciliation, or favor any peace. The Republic has passed and has left us a thugocracy. Americans speak derisively of the Russian form of government but they have a dangerous familiarity with each other today. I spoke to Mexicans who said, “We’re familiar with this. It’s how it works in Mexico.”

We should be grateful that it lasted as long as it did. Benjamin Franklin worried that we’d screw up the Republic and it took a lot of constant erosion to get it to where it is now.