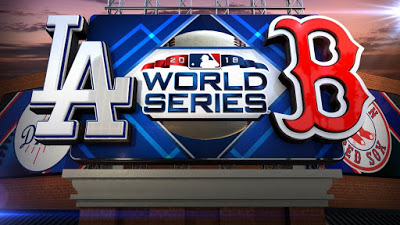 Eighteen innings last night, ending in a walk-off home run by Max Muncy, brought the Dodgers their first win in this World Series. Tonight the Dodgers are still down 2-1 against the Red Sox, but they’re on home turf and it’s going to be interesting to see how the Red Sox do. I’m pulling for the Dodgers, and I follow Dodger baseball throughout the season. The Red Sox had their historical best season in baseball ever. The Dodgers barely squeaked through into the series.
I’ve been invited to a World Series party tonight in the home of HARD CORE Bostonians, who really love the Red Sox. There will be all sorts of “Boston food” including lobster rolls, so it’s worth going just for the snacks. They had hoped that it would be the final game of the Series, with Boston clinching things, but they may be too fast in their celebration. In any event, the World Series won’t be clinched tonight (Saturday).
I could go into details. Those who like baseball already know them and those who are not baseball fans don’t care.