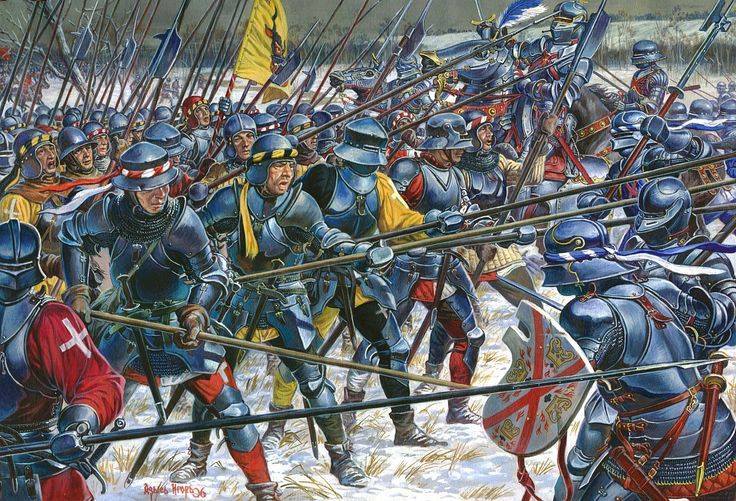 On March 2, 1476, the Swiss routed the most respected army in Europe at Grandson.

Charles the Bold of Burgundy inherited a strong, independent duchy in the heart of western Europe. During his reign as Duke, he nearly succeeded in creating a new, independent kingdom. His army was the most modern in Europe, a true combined-arms force of light and heavy infantry and cavalry; and possessed (arguably) the most up-to-date artillery train in the world.

Then he decided to go to war against the Swiss. Based on family history, recovered from archives in Bern, my ancestors wielded pikes at Grandson. So I can’t help but report on the battle, can I?

The Swiss Cantons were a loose confederacy that united (at times) against outside aggression. In their wars for independence against Austria in the 14th century, they perfected a tactical system of their own based upon highly mobile pike-and-halberd columns. Unlike nearly any army in history, the Swiss heavy infantry advanced to a battlefield in columns of attack; and, without pausing to deploy, swiftly attacked their enemy. This highly aggressive approach paid dividends, catching enemy forces unprepared or in the midst of deploying.

In close melee, the Swiss were nearly invincible.

Charles recaptured the castle of Grandson, the property of his ally the Duke of Savoy; which had been captured and garrisoned the year before by the Swiss. His brutal execution of the surrendered Swiss garrison signaled a “war to the knives” that united the Swiss. It’s never a good idea to accept terms and quarter and then kill everyone.

The Swiss relief force arrived unaware that Grandson had surrendered, or the fate of their comrades of the garrison.

The following (edited) description of the battle:

The Swiss army numbered a little over 20,000 men without artillery and probably slightly outnumbered the Burgundians. On 2 March 1476 the Swiss army approached the forces of Charles near the town of Concise. The Swiss advanced in three heavy columns, echeloned to the left rear; moving directly into combat without deploying, in typical Swiss fashion. Poor reconnaissance left Charles uninformed as to the size and deployment of the Swiss, and he believed that the Swiss vanguard was the entire force sent against him.

This vanguard, consisting mainly of men from Schwyz, Bern, and Solothurn (my ancestors), realized they would soon be in battle and knelt to pray. When they said three Our Fathers and three Hail Marys, some of the Burgundian knights reportedly mistook their actions as a sign of submission. In their zeal, they rode forward shouting, “You will get no mercy; you must all die.” The Burgundian knights soon surrounded the Swiss vanguard, but then Charles made a serious mistake.

After brief skirmishing, Charles ordered his cavalry to pull back so the artillery could reduce the Swiss forces before the attacks were renewed. Charles attempted a double envelopment of the leading Swiss column when the main body of the Swiss emerged from a forest, which had hitherto obscured their approach; catching the Burgundians shifting to make this attack. The appearance of the other two Swiss columns astonished the Burgundians, who retreated in panic.

The speed of the Swiss advance did not give the Burgundians time to make much use of their artillery and missile units, the guns being overrun before they could reorient on the new threat. The withdrawal soon turned into a rout, the Burgundians units breaking ranks and running. For a time, Charles rode among them shouting orders for them to stop and hitting fleeing soldiers with the flat of his sword. But once started the rout was unstoppable, and Charles was forced to flee as well.