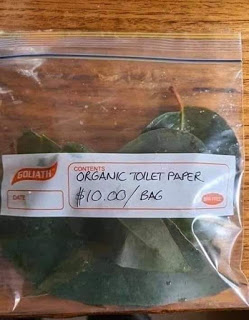 Facebook
Twitter
Pinterest
WhatsApp
Blast from the Past
This Virtual Mirage blog post remains the most popular historically. It’s a 2011 posting, so it’s been on the blog almost since the beginning. It involves a breach of contract – a legal case, where somebody thought that they were contracting for one thing and got another.

If you have a temperature of 105, body aches, chills, a relentless cough as your lungs fill with fluid and you’re peeing blood as your kidneys shut down, be sure to vote for TRUMP before you die.

During the China Flu Crisis

Virtual Mirage is selling organic toilet paper. Proceeds will go to a good cause, you can be assured of that.

What about the Census?

Will USGOV be sending people from door-to-door to get sick and infect others?

The question was put, how much will Hillary Clinton’s funeral cost? The guesses run north of $4 million. But for $4 million you could dump the corpse in Arizona and we’ll dig the hole so deep that we can present her to Satan personally.