They Muddled Through – somehow…

Home Blog Post They Muddled ...
Facebook
Twitter
Pinterest
WhatsApp
The photo below was taken in 1927 of the Chief of Police (in a business suit) in front of the old Anaheim, California City Hall.
I served with the Anaheim Police Department for a couple of years before moving on in my career and treasure the experience and the friendships. 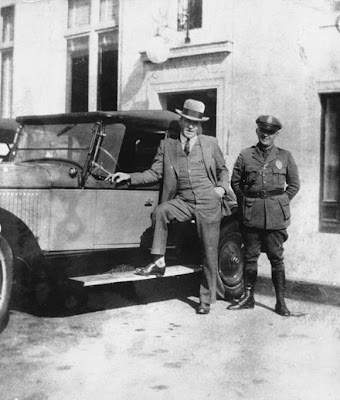 In 1927, the police didn’t have to worry about a lot that they worry about today and the restrictions on their actions were more or less those imposed by the Constitution without the significant burden of judges who re-interpreted the law-of-the-land from the Bench.
It’s amazing that the country muddled through for roughly 200 years without these liberal judicial guardians who have helped craft the model civilization we see around us today.
When I worked for the Anaheim police department, the watch commander and occasionally the chief-of-police drove by your house to make sure that the lawn was mowed and that the place looked appropriate. Police officers were expected to be model citizens in their lives, in their homes and in the community. Today liberal judges would defend the right of officers to be slovenly where once the standard was very high. Today the bar has been lowered in so many ways, not just for the police, but throughout society that we have a model of mediocrity to measure ourselves against.