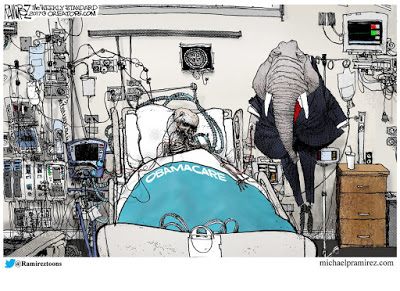 “The Arizona senator makes a poignant return to the Senate on Tuesday, less than a week after learning he has an aggressive form of brain cancer, just in time to boost tricky GOP vote math on the wobbling bid to replace Obamacare.”

This from Virtual Mirage:

Can anyone explain why Senator McCain didn’t go to a VA hospital for treatment?  Obviously CNN is missing THE STORY again, aren’t they? That’s a frigging shock.

It would have been emblematic of the changes that we’ve been hearing about (mostly in the “planning stages”) at the VA if the famous veteran and US Senator had chosen the treatment options available to his fellow service members.
Since ObamaCare’s trumpeting the virtues of government run “free” healthcare, I haven’t heard of one veteran serving in Congress checking into the VA hospitals to have their life-threatening illnesses managed. NOT ONE. I wonder why?
It’s true that you could point to me (your illustrious blogger) and ask why I don’t receive medical treatment at the VA. I haven’t had the need for extensive medical treatment, but when I do need some care, I choose other options (that I personally pay for since I don’t have government medical insurance). There will come a time in the near future when I will qualify for Medicare and I’m sure that I’ll be enrolled in that entitlement. That sort of machine is rolling. Along with Social Security it accounts for over half of the federal budget. And in my humble opinion, it’s part of why healthcare is so impossibly expensive.
“Standard of Care” is the buzz isn’t it?
Senator McCain must not have been all that impressed with the Phoenix VA, where thousands of veterans were standing in line for care when they died. I’m sure that Sen. McCain would have been shoved in front of other veterans because he’s more famous. Even at that, he didn’t take the option.
It’s telling.