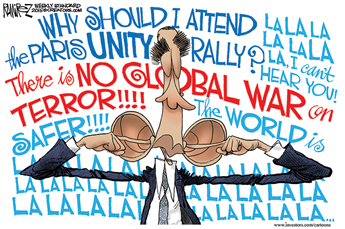 No, I didn’t listen to his speech. WoFat e-mailed me and asked me what Barack said.

I did not care what he had to say. I retreated to my garage, put on some tunes and cleaned the firearms that I discharged last weekend in the desert. When all is said and done, I accomplished a lot more than I would have listening to a utopian socialist crow. We’re stuck with him for two more years. I’m sure that it will cost us $2 trillion more in debt to keep him there as he and his band of Chicago thugs keep raping and pillaging.

If Barack shows up on the TV, even on the news, I change the channel. Nothing worth hearing.

It’s all quite depressing.