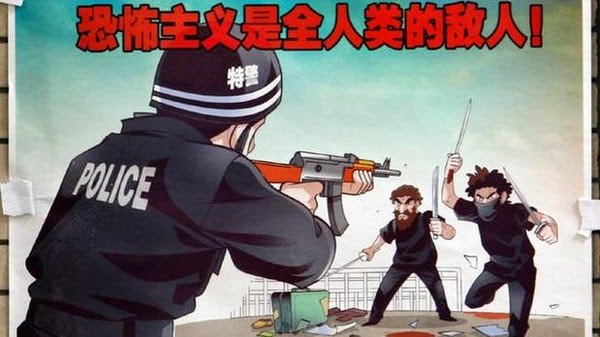 Facebook
Twitter
Pinterest
WhatsApp
China has a problem with Islamic Jihadists. There are those in the US (and Islamic countries) who label it “workplace violence”. The focus of these militants’ activities revolves around beheading those who insult the prophet and blowing up government buildings. If that sounds like a familiar pattern of workplace violence, it should.
Uighurs (Islamic Chinese) live in Northwestern China and have been illegally crossing the southern border into Vietnam as they smuggle themselves into and out of China to engage in “job training” in Islamist centers.

The Chinese Ministry of Public Security said that since May a task force on human smuggling across the country’s southwestern borders had uncovered 262 cases. The authorities said they worry that Uighurs go abroad to contact Islamist militants. The smuggling is “mainly organized abroad and controlled behind the scenes by the East Turkestan Islamic Movement (ETIM) in efforts to spread religious extremism, and bewitch and incite people to flee abroad to take part in jihadist activities.”

Uighur militants attacked public transportation stations in several major cities in southern China over the past year. When they come back from the “job training”, they are enthusiastic and immediately engage in “workplace violence” in Southern China before they can get back home in Northern China and blow something up or behead somebody there.
Chinese state media reported that yesterday (Jan 19) Chinese police shot and killed two ethnic Uighurs who were trying to cross the border into Vietnam. A “conflict” occurred when the Uighurs “violently resisted arrest” near a highway tollbooth on Sunday night in Pingxiang city in the southern region of Guangxi Province. It’s just another case of workplace violence being handled by the police in China.