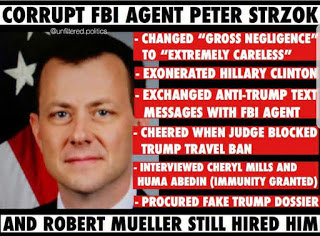 Facebook
Twitter
Pinterest
WhatsApp
The complicit and engaged corrupt, elite media, the Obama Administration and its catspaws in the media and the FBI have engaged in an effort to topple a duly elected President of the United States. The evidence is there for all to see and the current efforts of both the New York Times and the Washington Post to soften the blow that will fall from disclosures that the FBI infiltrated the Trump Campaign for the benefit of the Clinton Campaign (first) and to provide an “insurance policy” (their words, not mine) in the event that Donald Trump was elected president, are black marks upon our nation that will resonate. It was those actions for and on behalf of the Obama Administration that we now see played out.

Is the FBI an enemy of the State? Make of it what you will, but the leadership and cadre at the very top clearly was acting against America. Is it still? Well, we don’t know, do we. They expected Hillary to be elected and all of this filth would have been swept under the rug.

The current spin from the corrupt, lying, elite media is worth a brief review: “Obama’s FBI was not “spying” on the Trump campaign but used an “informant” to “investigate Russia ties.” The Washington Post is claiming that the Obama FBI was not going after Trump . . . they were “protecting him.” They claim that the nation and President Trump owe the FBI a huge debt of gratitude. It’s not unlike having somebody take a dump in your bowl of cornflakes and expect you to thank them for giving you more to eat.
The Mueller Investigation has taken on the centerpiece of the slow-motion coup and the problem that they have is that there is not a scintilla of evidence that Donald Trump did ANYTHING wrong.
Now for the sermonette: We all know that the Deep State has prospered in their efforts to bring America down. They’ve sold us out in trade deals, Barack sold us out to Iran, Barack was caught on a hot microphone colluding with Russian President Medvedev, and it’s not only the Democrats. The RINOs too are just as much to blame. We don’t have a wall with Mexico, we have ruinous trade deficits all over the planet. And they really hate the president for wanting to change their scam.
Thoughts are ephemeral. They evaporate the moment they occur, unless they are given action in material form. Wishes and intentions are the same. Meaningless, unless they impel you to one choice or the other, some deed or course of action, however insignificant. Thoughts that lead to action can be dangerous. Thoughts that do not, mean less than nothing.
Actions by the FBI need to be punished by prison terms. Treason needs to be dealt with not because of thoughts, but because of the actions that follow them. Deep State actors need to be exposed and need to be deposed because of what they did while in a position of honor, trust and profit for this nation.