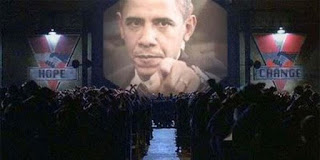 I’m sure that was the sense of certainty in the triumph of the Democrat Party in the last presidential election that Barack Hussein Obama felt. Orwell said it best, perhaps, “If you want a vision of the future, imagine a boot stamping on a human face – forever.” (1984) The feeling of power and invincibility must have been heady when he ordered the FBI into the Trump Campaign, when his minions created false FISA Court surveillance warrants and when his political adversary was wiretapped.

It wasn’t the first time. Under Obama, the National Security Agency collected data on electronic transmissions of American citizens without a warrant. It was an age that Hillary planned to expand upon – and there was the pesky problem of hundreds of millions of firearms and trillions of rounds of ammunition in private hands. The Founding Fathers understood that free people are armed and that slaves are not.
Smug, sly, self-satisfied ghouls like Big Jim Comey and Robert Mueller are the perfect agents of “change” because they believe(d) that they had a messianic style mission to remove the stone from the shoe of the deep state. President Trump was never the “Republican” choice. The deep state Republicans and the media liked JEB! because he was a useful tool, a dim bulb, a legacy ruler who would fail  in his campaign – but fail graciously. His campaign slogan was “Jeb can fix it.” $100 million bought him an early failure – largely due to Donald Trump, who mocked him and America saw that the retarded Bush was an incompetent goof.
The globalists don’t trust America or its people. Americans are armed, they are remarkably resistant to the sort of Hope and Change offered. You’ll note that Barack lost the legislature completely and gave President Trump a majority in both houses. He was also the best firearms salesman that the world ever saw. Under his watch, America geared up (for Hillary?) for trouble. Those pesky, despicable people in fly-over country who trusted to their God and guns never caught the vision that the bi-coastal elites peddled on mainstream television and in the elite media.
Now there is Trump. And you know they’d like to kill him. But killing him won’t work unless they smear him first. They don’t want a martyr. Think of that the next time you watch CNN.