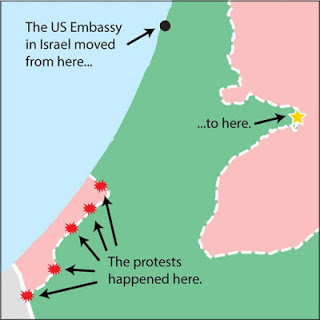 Yesterday, The Jerusalem Post reported  that up to 8,700 Palestinians have been wounded and around 100 people killed in the rioting that Hamas started on 30 March.
The Great March of Return that Hamas launched in Gaza on 30 March culminated on Nakba Day (Day of Catastrophe) on 15 May. Fewer civil disorders occurred on 16 and 17 May.
Context and Precedent: In 1988, Yasir Arafat instituted Nakba Day to commemorate the exodus of some 700,000 Palestinians before and after the Israeli declaration of independence in 1948.
These were not peaceful protests in any sense because the participants gathered at the fences prepared for violent confrontation. The Israelis also were prepared and issued multiple warnings. The confrontation was one-sided, as it always has been.
The Jerusalem Post published on 14 May – Israeli Independence Day — a lengthy, cogent analysis of the Hamas-instigated movement as self-destructive and self-victimized. The so-called marchers twice burned the only border crossing point for humanitarian aid and goods to Gaza. They disrupted the power and fuel lines for the Gaza Strip which is chronically short of power. The Palestinian men sent women and children to the border fences, knowing they would be shot.
The Israelis understand the problems in great detail, but the Hamas-instigated riots appear driven by pre-modern impulses that defy modern solutions and prescriptions.
Palestinian leaders say the marches and clashes are important because they send a message to the world. For the past two weeks, the Palestinians have been heard around the world. They have raised awareness at a great cost in lives and treasure. The message has been sent. The world is aware.
Every time the Palestinians send their message, the Muslim and western nations say all the right words of outrage. The Israelis get blamed for excessive use of force, until the next time. The major change is that the Palestinians in Gaza make their people’s living conditions worse.
The actions of the Palestinian leadership in Gaza and the West Bank are sufficient to sustain the life of their political system, but only because they are in a power-sharing relationship with Israel and aid donors. The Palestinian component of the power-sharing system is not self-sufficient and cannot prevent the collapse of its population without help. The Palestinians are dependents of the external components of the power-sharing arrangement.
The external components of the power-sharing arrangement – Israel and the aid agencies — provide sufficient systemic sustenance to prevent the Palestinians from collapsing but not enough to make them whole, healthy or prosperous under present management.  It has been surviving under these conditions for 70 years. This is the system preferred by various and successive generations of Palestinian leadership because dependence on them keeps them valid, important and in power.
Comparison
There is a comparison between Palestine, and its leadership and American inner cities and Democrat Party hegemony. Keeping a class of people dependent, miserable and by controlling the aid that reaches them, insures that power continues. It’s cynical, but the calculus works. The corrupt, sly, elite media in the US (and they also cover the Palestinian situation) work hard to insure that the people never understand their role as poor and dependent pawns in a money game that is played at their expense.
It is no wonder that the media in the US is so frantic – so desperate to remove President Trump from office, because he does not buy into their false narrative in the way that so many former US presidents have. It could upset the applecart in the inner cities in America – and if the dependent class are employed, and happier, who knows what might transpire among those artificially depressed people?