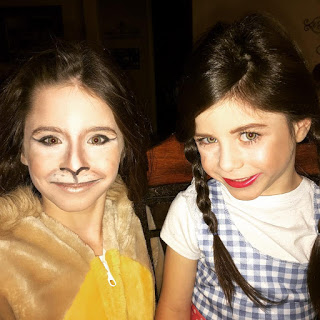 (1) In the photos I have seen on media, the stamps are not canceled. Which is very suspicious and suggests that they were not passed through the post office.

(2) None of the devices detonated. If they’d been sent by Republicans to Democrats, I suggest that they would have.

(3) It smacks of a hoax, possibly to increase the TV ratings of CNN and MSNBC.

Halloween – You don’t have that many shopping days left. If you have any doubt about whose grandchildren will be the cutest little candy scavengers out there, that would be mine.

(right) Alyssa (9) and Savannah (5) are trying things out. Courageous Lion and Dorothy…their younger sister is Toto.
I went to one of those Halloween costume stores and wandered around with one of my grandsons. Where were they when I was a kid? You can buy some seriously cool stuff there. Sure, it’s essentially landfill, but it’s neat. You can buy a baseball bat wrapped with barbed wire (plastic). When I was a boy we wrapped real barbed wire around baseball bats. How things have changed.
It’s a holiday for dentists. Then there is the dramatic run-up to Christmas. Christmas is an expensive holiday. Independence Day is my favorite because I like BBQ, fireworks and no emotional baggage. I’ll be in SoCal this Halloween, so I’ll be going from door to door with the grandchildren to protect them from perverts and genuine freaks.
__________
The Election – I really hate robo-calls and unsolicited texting. The crap that comes in the mail is instantly tossed.