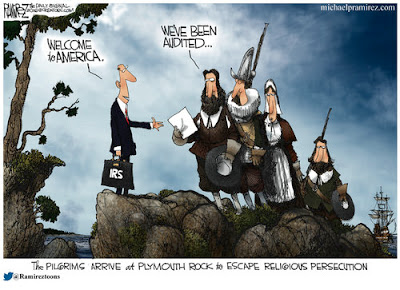 Facebook
Twitter
Pinterest
WhatsApp
President Trump vowed to drain the swamp and to reduce both personal and corporate taxes. Growth should offset those numbers and reducing or eliminating some federal departments such as Education and gutting others such as the EPA will help. But what about the IRS?

We know that President Trump, while a businessman, was hounded by the IRS and that Barack used them as his personal attack dog to launch against political enemies.

Will there be needed changes in that bureaucracy? Will the tax code be fixed and reduced to a manageable size? These are bonuses that would save ever business and every taxpayer money, likely not costing the government anything  –  but are they a bridge too far for a single four year presidential term? There are a lot of precious porkbarrel items in that massive tax code that lobbyists will work (on behalf of clients) to retain. The unbounded protection of sugar is one of the biggest. A clue to his intentions will come when he appoints a Secretary of the Treasury.

Then again, it’s always better to do business in cash when possible.