The Secret of Bungang 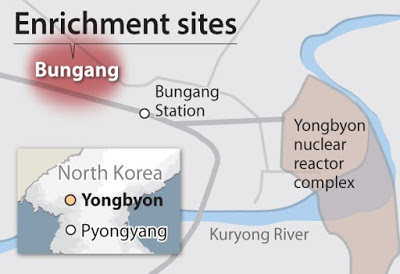 Facebook
Twitter
Pinterest
WhatsApp
The Summit between the USA and North Korea in Hanoi ended more abruptly than most observers expected it to and as usual, the media blamed the Americans. But it’s a bit more complicated than that.
The American team brought up the secret North Korean facility for enriching uranium that is located at Bungang, and it caught the North Koreans by surprise because they thought the US was unaware of the facility and it’s ongoing activity.

On 6 March, the South Korean newspaper Korea JoongAng Daily, published a detailed report about the secret facility. It is an underground facility located at Bungang, a few kilometers from the Yongbyon graphite-moderated nuclear reactor and plutonium reprocessing campus.

The North Koreans consider it separate from Yongbyon. When Kim offered to dismantle the Yongybyon facility, this facility was not included in his offer. The US team asked for it to be included.
“The Bungang complex is situated just northeast of the existing Yongbyon complex,” one source, cited by JoongAng Daily said. “The North Koreans built an underground highly enriched uranium factory there to prevent detection from abroad.”
This town is where the Yongyon workers reside. It is a nuclear town, with a high school and higher learning facilities geared to nuclear physics. US and South Korean intelligence agencies reportedly have suspected this site since 2008.
The North Koreans remain under no obligation to stop weapons production or to reduce the threat to South Korea and Japan in any way. The continuation of arms business as usual during negotiations is a strategy that does not support Kim’s profession of good will and bonhomie.
Their national investment in weapons is so great and the portion of the working population tied to arms production is so large that no North Korean leader could agree to denuclearize. And therein is their dilemma. They can feed their people or they can make weapons of mass destruction, but they find it difficult to do both. So they’ll continue to enrich uranium.