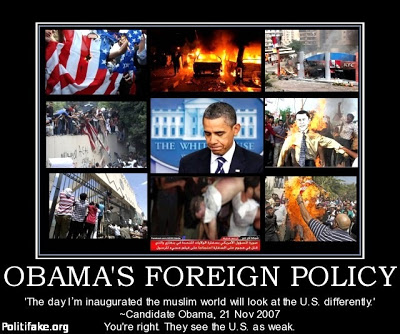 Republicans and Libertarians – the problem is all inside your own heads. Don’t any of you watch MSNBC anymore. If you would do that more often, you wouldn’t hear much about Benghazi. You’d hear more about the president’s triumphs. As President Obama’s Press Secretary, Jay Carney said, “It happened a long time ago” and Secretary Clinton said, “what does it matter?” Secretary Clinton and her minion Susan Rice simply played by the Obama Playbook, because they were required to lock step and LIE to the American people. Team Obama made a cynical and possibly accurate decision in shucking off the Benghazi Massacre because they knew that the American people wouldn’t hear about it and if they did, they wouldn’t care.

September 10, 2012 – The election is less than two months away and the campaign pivots in part on the assertion that the President captured and killed the illusive Osama bin Laden and crushed al Qaeda.
September 11, 2012 – al Qaeda (not respecting the brother in the White House one bit) breaks with the Obama re-election program and attacks the US Consulate in Benghazi, Libya and then the CIA annex a few blocks away.
A C-130J is loaded with an armed SPECOPS response team, 1 hour by air away in Tripoli. Fast moving jets can be there quicker and prep the area. The Libyan government has no problem with Americans protecting their own. (CBS News) The word is then passed through AFRICOM that any assistance rendered to the US people under attack would mess up the Obama Agenda on the eve of an election.

According to the source, when the attack on the Consulate occurred, a specific chain of command to gain verbal permission to move special-forces in must have occurred. SOCAFRICA commander Lt. Col. Gibson would have contacted a desk officer at the time, asking for that permission.
That desk officer would have called Marine Corps Col. George Bristol, then in command of Joint Special Operations Task Force-Trans Sahara. From there, Bristol would have made contact with Rear Admiral Brian Losey, then Commander of Special Operations Command Africa. Losey would have contacted four-star General Carter Ham, commander of U.S. AFRICOM at the time.
“Ham answers directly to the President of the United States,” said the source. It wasn’t a low-level bureaucrat making the call, the source adamantly added.

What about then-Secretary of State Hillary Clinton?

(More from Brietbart) “I have a hard time thinking it was Hillary alone. Hillary may have tried to circumvent the counterterrorism board and deal with this. I think in order for her to tell General Ham, ‘No, you’re not going to get involved,’ she would have had to talk to the president. The president would have had to say, ‘No, take your commands from Hillary.’ He would have had said something, because Ham does not work for the Department of State; he works directly for the president,” the source explained.