The Morning After, The Day Before 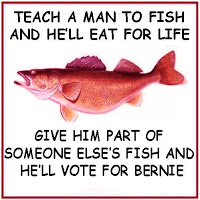 The results of the Iowa Caucus are not yet in and the airwaves are clogged with opinions. I’ll summarize my feelings on the matter briefly by reading the tea leaves. 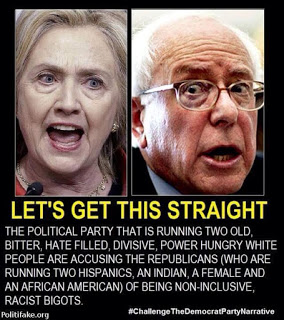 It doesn’t matter who in the Democratic Party wins or loses because the FBI will refer the criminal investigation it’s conducting on Hillary Clinton to the Justice Department for prosecution.

(yes, I realize that I may be showing faith in a system that was clearly broken during the years of ObamaNation – sorry if I’m too much of a Pollyanna)

The shrill, pear-shaped lesbian, pictured far left, will shift her delegates (tearfully) to somebody other than Bernie. Possibly Joe Biden? Sanders won’t be allowed to be the Democratic Party’s nominee even if he wins because the Party will change the rules on him if he’s close.

That will cause an upheaval because there is a groundswell of angst and revulsion among a certain class of Democrats, resulting in Sanders forming a third party (“The Progressive Party?”).

It’s always the Democrats who snicker when Republicans threaten to form a third party, but the snickering may stop if this happens. Or they could arrange for Bernie to have a convenient heart attack. He’s like 100 isn’t he? If they need advice on how to manage that, they have Bill and Hillary close at hand and they can consult – for a fee.

For all of the struggle that the GOP is having in the nominating process, it’s nothing compared to what will happen to the Democrats because of their failure to allow an honest nominating process within their political party.

And moving on, the Sunday talk shows will be full of pundits who are working to sway voters this way or that in order to preserve their pocket books (for the most part), which are filled by parasites who lap at the troughs of those who own the Washington Beltway.

There are other things going on in America, but nobody is reporting on them with any interest. I get it. The focus is on the big show and can we reverse the damage done to the nation over the past 7 years?