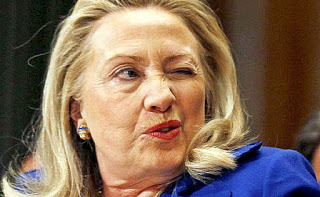 The media talking heads were crowing like roosters at dawn that Hillary Clinton won the Democratic Caucus in Iowa last night, (by something on the order of .3%).
Clinton ascended the dias to accept accolades but she’s a political animal and knows that Bernie Sanders dealt her a serious blow.
She tied a 74 year old socialist who isn’t even a Democrat, and proposes a maximum tax rate of 90%. They come out of Iowa with the same number of delegates to the national convention. If that is a win, I think that her opponents in the opposition party will cede it to her. 49 more states to go until the nomination provided that she’s not indicted by the Justice Department.
The Democratic Party’s mandarins have to be secretly concerned that she has such a bad showing in Iowa. At one point, she was 50% ahead of Sanders. He closed the lead down to nearly an even score. What does that portend for the Party of Obama?
If they need somebody stronger, Barack can tell DOJ to indict the Bitch of Benghazi, opening up a window for Biden or some other luminary to run against Sanders for the nomination. Or they can wedge an acceptable vice president in under Sanders and he can die in office. These things happen.
The people who had to show big in Iowa such as Huckabee (dropped out) and O’Malley (dropped out), Fiorina, Glimore, Santorum, Jeb!, Christie and Kasich were all blistered.  Carson, who hoped to appeal to the hard core religious vote, finished in fourth place and he’s not expected to do well in New Hampshire next week. He may remain in the race for a couple of weeks but the money will dry up. Carson is a rich man, but not rich (or stupid) enough to self-fund a campaign where people aren’t supporting him. The Republicans have had a three way race for a while and it remains between Trump, Rubio and Cruz.  The others are trying to steal a little thunder but all they’re going to end up doing is humiliating themselves if they stay in through the end of the month.
Jeb! vowed to remain in it to the end even though he only managed 3% of the R vote in Iowa. He has the money and the ego to do it. 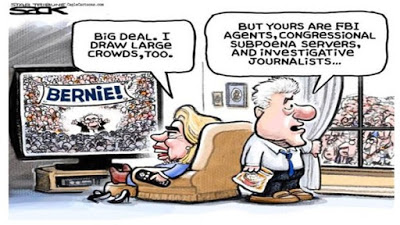