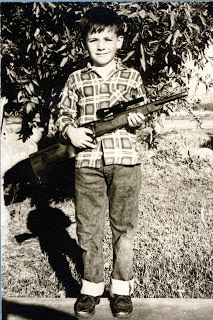 For those of you who can target shoot in your back yard (the way I did when I was a kid) or who can drive two miles to the local range, I’m howling for pity, because I can’t.
As a young man, living in Arizona, Colorado, etc. Shooting was a way of life for me and everyone who lived around me. In Southern California, the climate is different.
In order for me to shoot in an area where people won’t call the authorities, I need to drive a minimum of three hours from home. Six hour round trip.
There are ranges closer BUT
So, no, I have shot there.
The trackless Mojave Desert does offer shooting opportunities in relative peace – a three hour drive from the house in each direction, not counting traffic, which can easily make that five hours in each direction.
I can go to visit my buddies in the mountains of Northern Arkansas where the ATF dare not tread in search of moonshiners or shooters (see right). There are a lot of private ranges in Arkansas where you can shoot unmolested. It’s a three-day drive from home in each direction.
In all fairness, there are a lot of shooting opportunities a three day drive from the inner city/blue state hell.
Yes, it’s true that I’m spending a lot of time in Nevada where everyone is armed to the teeth and there are more shooting ranges than shopping malls, so maybe my rant is only slightly hollow.