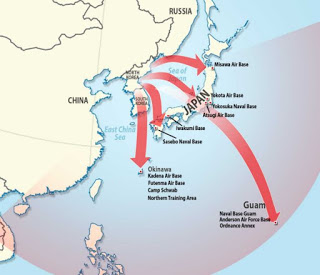 There are a number of conflicts and potential conflicts around the world, but none is judged by me (and a host of others) to be as likely to light off as one generated by North Korea. It’s a starving rogue state that puts all of its national effort into building missiles and nuclear weapons. Thus you see more attention paid here to keeping you, the two dozen or so people who read this blog, up to speed. The elite mainstream media is focused on gender self-identification, on the new season of the Kardashians, and on their devout hatred of President Trump, so there’s not time to brief the American people on genuine threats. North Korea is expediting the militarization of the democracies in northeast Asia.
Japan vs Democratic People’s Republic of Korea (North Korea)
On 9 March, Defense Minister Tomomi Inada told the House of Representatives Committee on Security that Japan does not rule out the possibility of acquiring the capability to conduct preemptive strikes against enemy bases as a way to deal with launches of ballistic missiles by North Korea.

“We will consider various measures” in line with the limits of international law and the Japanese Constitution. Inada said that the government is not currently considering giving the Self-Defense Forces such capability. However, Inada suggested that doing so and conducting such strikes are legally possible.

Prime Minister Shinzo Abe told a Diet committee on 26 January that Japan is open to acquiring enemy base strike capability. He said that Japan needs to consider how to maintain its own deterrence. A team of the ruling Liberal Democratic Party, led by Abe, also is studying the possibility of Japan acquiring such as capability.

Article 9 of the Japan Constitution states that the Japanese people “forever renounce war” and the “use of force” as a means of settling international disputes. However, the self-defense forces were formed to execute their eponymous mission, not necessarily on Japanese shores. For example, North Korea announced that the purpose of the 6 March launches was to practice striking Allied forces in Japan.

North Korea persists in taking significant risks in shooting missiles towards Japan. In 1998, it launched a missile over Japan into the Pacific Ocean. Japanese officials reportedly made preparations at that time to attack the North’s east coast launch site. All of the launches last year, splashed down in the Sea of Japan, many in Japan’s Exclusive Economic Zone.
One of the missiles in the 6 March salvo miscarried. News reports indicated it splashed down in the Sea of Japan, but outside the cluster of the other three missiles. A missile misfire in another direction could land on Japanese soil, not just in its Exclusive Economic Zone. The history of North Korean missile launches provides a reasonable basis for doubting the reliability of North Korean missile technology and control systems.
Japanese leaders have well-developed, long standing contingency plans for responding to a misfire that struck Japan. We suspect some include neutralizing North Korean missile sites and facilities.
Republic of Korea (South Korea)
On Friday, 10 March, the Constitutional Court unanimously upheld the impeachment of President Park Geun-hye. She is South Korea’s first democratically elected president to be impeached and removed from office.

Former President Park was impeached by the National Assembly on 9 December on charges of letting a close friend meddle in state affairs, colluding with her to extort money from conglomerates, and neglecting her duties during a 2014 ferry sinking that killed more than 300. A ruling by the Constitutional Court was the final step in a 92-day impeachment process.

Per curiam. “The negative effects of the president’s actions and their repercussions are grave, and the benefits to defending the Constitution by removing her from office are overwhelmingly large,” acting Chief Justice Lee Jung-mi said in delivering the ruling.
Of the charges brought against the former president, the Court upheld the illegality of Park’s actions in letting her long-time friend Choi Soon-sil handle state affairs. The eight justices unanimously found that Park thoroughly hid Choi’s involvement in government affairs, saying she not only denied the suspicions, but was also critical of them. The Court found that President Park violated the law and the Constitution continuously throughout her term of office.
Popular sentiment was overwhelmingly in favor of Park’s removal from office. Some of her supporters protested, but the outcome is what most South Koreans expected. An election to pick her successor must be held within 60 days. Many observers expect it to occur on 9 May.
This exercise in democratic accountability will mystify North Korean leaders and people. The North’s propagandists have not covered Park’s impeachment, possibly for fear of how North Koreans might react to the ouster of a corrupt leader by public, legal proceedings.
The Norks
On 8 and 9 March, North Korea reacted strongly to the UN statement that criticized its missile launches on 6 March, the Allied exercises and the arrival of equipment for the Terminal High Altitude Area Defense (THAAD) system in South Korea.

On 8 March, a spokesman for the Foreign Ministry said, “…The United States and other hostile forces nevertheless instigated the UN Security Council to find fault with our army’s routine drill as a threat, and release a so-called press statement, even though they are mustering countless strategic assets and vast armed forces and openly conducting drills for a real war aimed at launching a preemptive nuclear strike on our Republic. This is a brigandish act tantamount to a thief crying thievery.”

“We categorically reject the UNSC’s press statement, which flagrantly violated a sovereign state’s right to self-defense.”

The Foreign Ministry spokesman concluded, “As has been already proclaimed, if the United States and the South Korean puppets let a single spark of fire fly to the territorial areas where the sovereignty of our Republic is exercised, our army will reduce the strongholds of aggression and provocation to ashes with its invincible Hwaso’ng guns fully loaded with nuclear warheads, and leave them with no chance of survival, thereby reliably defending the security of the fatherland and the happiness of the people to the last.”

“…Our Strategic Force is maintaining an elevated state of agitation in line with the demands of the grave situation that can break out into a real war at any time and flawlessly making preparations for maneuverability, for positions, for technology, and for strikes so that each Hwaso’ng gun can instantly and immediately emit the trails of annihilate-the-enemy fire, if only the order is given…”
“No matter what rhetoric the aggressors and provokers may make, our Strategic Force will more perfectly arm itself with our-style rockets of super precision and intelligence and further round off the Juche-based rocket strike war methods.”
“The US and the south Korean puppet forces should clearly bear in mind that our warning that if a single bullet is fired into the areas where the sovereignty of the Democratic People’s Republic of Korea (DPRK) is exercised, it will blow up the bases of aggression and provocation with the matchless Hwasong artillery pieces mounted with nuclear warheads, is not hot air.”

On 9 March, a spokesman for the National Peace Committee (Norks) denounced South Korea for bringing in materials and equipment for the Terminal High Altitude Area Defense (THAAD) deployment as soon as the site agreement was signed, and stated South Korea’s maneuvers to deploy THAAD at an early date will “bring about only catastrophic consequences and disasters.”
What is missing in the three warnings is a time term for retaliation. North Korea did not say it would “immediately” return fire, as it has on past occasions. That omission weakens the warning. 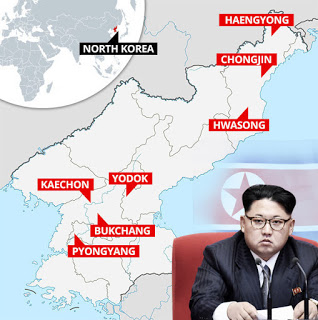 The statement by the Strategic Force confirmed that the missile forces are on alert. The summary breakout of the types of preparations reinforces the credibility of the alert statement. The Foreign Ministry statement and the Strategic Force’s statement are similar in indicating that the launch doctrine is” launch after initial attack,” i.e., if a single bullet is fired, and when ordered.

Launch when ordered is the rule for every military force. However, waiting until the first shot is fired is a conservative launch doctrine. The US used to call that “launch under attack.”

What the Nork spokesmen did NOT say. They did not use language indicating North Korea would attack preemptively, though that is precisely what North Korea threatened last year at this time. They did not say that North Korea would launch a first strike. The North Koreans did not use language that indicates North Korea would launch missiles upon receipt of strategic or tactical warning. The assertion that war could break out at any minute means that North Korean leaders already have reacted to strategic warning and tactical warning by putting forces on alert. That is what the summary list of preparations signifies. They are the reaction to strategic and tactical warning.
One of the implications is that North Korean intelligence apparently cannot distinguish with high confidence between Allied training and actual war preparations. Thus, they err on the side of prudent precautions in the face of uncertainty. It is good readiness training for the forces and cuts reaction time, but it still leaves them somewhat vulnerable to a sudden attack under the cover of an exercise.
Reaction to China
North Korea has not commented on Chinese Foreign Minister Wang’s proposal for a suspension. The North’s comment about the preparations of the Strategic Force implies that the leaders in Pyongyang are not open to suspending any military readiness conditions.