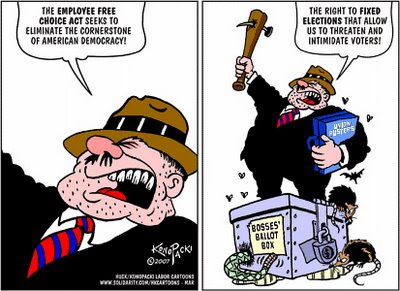 Heavily Democratic US States such as California, Illinois, Connecticut, Michigan and New York are anxiously waiting for the Federal Government to bail them out* (with money taken from other states) because they are insolvent. There is another option and I believe that it should be taken up by the new Congress in January 2011.
Change the law to allow US States that are insolvent to seek protection under US Code Title 11, Chapter 9 (Bankruptcy Code). The law presently provides for reorganizing municipalities** (which includes cities and towns, as well as villages, counties, taxing districts, municipal utilities, and school districts). This law should be expanded to states rather than bailing them out.
They can go bankrupt and put their debts at the feet of a Federal Court that will have to decide which bills will be paid and when they will be paid. It would result in NOBODY doing any business with the bankrupt state because there is no telling when they would be paid. The court could also order them to sell land holdings, etc. to try and satisfy the debts. I am sure that state parks would be exempt, but most states have an inventory of properties and assets they could put on the auction block.
Big Labor will fight this sort of law tooth and nail. And the country needs to decide who is running the states – the voting public or corrupt unions.***  Applying bankruptcy rules to states would force them to get their financial houses in order under the supervision of the courts. There is no other practical way to do it. Allowing the “Chicago Way” to rule America despite the presidency of Chicago-based Barack Hussein Obama, is not sustainable.
According to the Wall Street Journal (speaking of California in particular), “You’ve racked up nearly $70 billion in general obligation debt, and that doesn’t include your $500 billion unfunded pension liability. Your own analysts predict you’ll face a hole of at least $80 billion over the next four years.
“Your government’s run by a brothel of environmentalists, lawyers, public-sector unions and legislative bums. When they’re not taxing or spending, they’re creating regulations and commissions like the Board of Barbering and Cosmetology and the California Blueberry Commission. Many businesses would leave if it weren’t for your sunny climate.”****
*(LINK) Dick Morris’ Blog
**(LINK) “The first municipal bankruptcy legislation was enacted in 1934 during the Great Depression. Pub. L. No. 251, 48 Stat. 798 (1934). Although Congress took care to draft the legislation so as not to interfere with the sovereign powers of the states guaranteed by the Tenth Amendment to the Constitution, the Supreme Court held the 1934 Act unconstitutional as an improper interference with the sovereignty of the states. Ashton v. Cameron County Water Improvement Dist. No. 1, 298 U.S. 513, 532 (1936). Congress enacted a revised Municipal Bankruptcy Act in 1937, Pub. L. No. 302, 50 Stat. 653 (1937), which was upheld by the Supreme Court. United States v. Bekins, 304 U.S. 27, 54 (1938). The law has been amended several times since 1937. In the more than 60 years since Congress established a federal mechanism for the resolution of municipal debts, there have been fewer than 500 municipal bankruptcy petitions filed. Although chapter 9 cases are rare, a filing by a large municipality can— like the 1994 filing by Orange County, California—involve many millions of dollars in municipal debt.”
*** Election Day 2010 demonstrated the enormous power of public employee unions and their integral relevance to the Democratic Party. In state after state, the vote totals of Democratic candidates, particularly those running for Senate, exceeded the predictions of all pollsters. This gap between pre-election anticipation and Election Day results had one main cause: the militancy, money, and manpower of public employee unions. It was the combined efforts of the SEIU (Service Employees International Union), the NEA (National Education Association), the AFT (American Federation of Teachers), and AFSME (American Federation of State and Municipal Employees) that preserved the Democratic control of the U.S. Senate.

**** (LINK) The Wall Street Journal refers to California as the “Lindsay Lohan of States” — that sums it up.