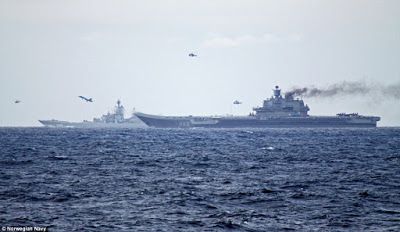 The Royal Navy shadowed the Russian aircraft carrier/aircraft-carrying cruiser Admiral Kuznetsov and its escorts as they approached the United Kingdom on the 19th. The escorts include the nuclear-powered battle cruiser Pytor Veliky (Peter the Great), two destroyers and four support ships.


Concerns over Britain’s ability to monitor the vessels has been heightened as the UK no longer has its own surveillance planes due to funding cut-backs. Norwegian and US maritime patrol aircraft filled in the gaps.
The Russians are deploying their Northern Fleet and much of the Baltic Fleet to the waters off Syria in the largest surface deployment since the end of the Cold War. This is not a friendly port call. In two weeks we will see a crescendo of air attacks on Aleppo as part of Russia’s strategy to declare victory there.”

Barack dissolved the US Sixth Fleet, so there hasn’t been an American fleet in the Mediterranean since that happened. Some US ships have been assigned to patrol that region but it has not been anything on the order of a fleet.  The Russians have stepped into that void.
The Russian naval task group, especially the aircraft carrier Admiral Kuznetsov, is expected to participate in the operations against the rebels in eastern Aleppo. It should arrive within the week. In August, Russian Defense Minister General Shoigu said the Admiral Kuznetsov is scheduled to support Syrian operations until January 2017. 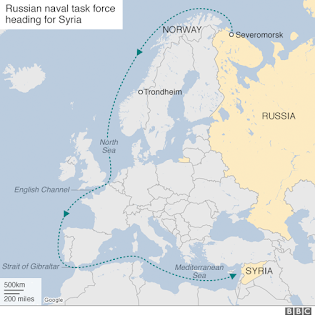 Russia already has ten ships supporting operations in Syria. The Admiral Kuznetsov and its escorts will add to that number.
Humanitarian pause extended. On 19 October, Deputy Chief of the General Staff General Rudskoi said, “Tomorrow, on 20 October, a humanitarian pause will be implemented in Aleppo from 0800 to provide free passage to civilians, for the evacuation of the sick and wounded and the withdrawal of militants from the eastern districts of the city.” This proposal is intended to justify in advance the destruction that is likely to follow after the ceasefire ends and the putative “final offensive” starts.
General Valery Gerasimov, Chief of the Russian Armed Forces General Staff, expressed concern that militants from the Islamic State could escape from Mosul in Iraq to Syria. It’s something that Donald Trump mentioned in the debate last night, that Hillary shucked off as preposterous. The Russians aren’t wrong and neither was Trump, but the Obama Regime has so mismanaged the situation(s) in the Middle East (along with everywhere else) that they’re left looking foolish (as usual).

“Our attention is primarily on the militants’ possible attempts to break out of Mosul, or leave the city unimpeded, by agreement, in the direction of Syria,” Gerasimov said according to Interfax.

“We hope that our partners from the international coalition realize what the effect would be of large ISIL gangs roaming free in the Middle East region. It is therefore necessary to destroy terrorists on the spot, not push them around from one country into another.”

Gerasimov’s comments about Mosul are a legitimate concern. They also seem pertinent to Russian intentions for operations against the rebels in eastern Aleppo.

If you were to ask where the United States is in all this, really all I can do is shrug my shoulders. At this point, the US doesn’t have a significant horse in the race. It’s a Russian and Turkish game with Barack and friends sitting on the sidelines puffing and blowing. 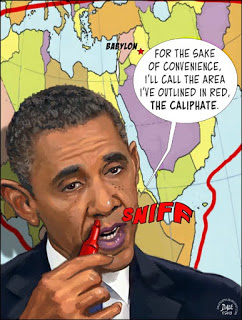 America and Another Red Line?

Given the nature of the rigged presidential election back home in the US, the lack of capacity in the Mediterranean, etc., the US has apparently threatened Russia with nuclear weapons either tacitly or openly. The Russians responded by alerting its public to be ready for a nuclear war with the US – as it moves forward.  The US dismissed the Russian response as ‘mere theater’, but that’s not how I see it. The Russians have shown that they are ready to go for broke and they dismiss American threats as just another red line that the foolish and corrupt Barack is drawing.


Isn’t it interesting that the Democrats (and their media shills) are accusing Trump of potential irresponsibility with the use of nuclear weapons when they themselves are (likely – I have no proof at this point) rattling nuclear sabers at the Russians?

An America in decline, the Brits (an island nation) without maritime aircraft, and on and on speaks to a changing world. But don’t worry – there are still free Obamaphones, welfare and medical benefits for illegal aliens – who are allowed to vote in American elections…